With more steamy scenes at the cinema, critics worry

With more steamy scenes at the cinema, critics worry 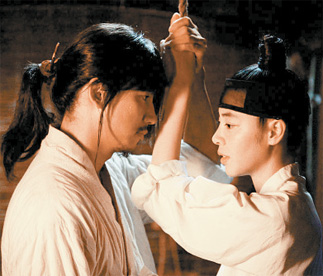 “A Portrait of a Beauty”

Of late, Korean films have become remarkably sensational - eroticism seems to be the new byword for charm.

“A Portrait of a Beauty,” a recent film starring Kim Min-sun, for example, has stirred controversy over its steamy scenes, but ranks top at the box office.

The upcoming film, “A Frozen Flower,” starring Joo Jin-mo and Jo In-sung, is also expected to have numerous provocative scenes on screen. 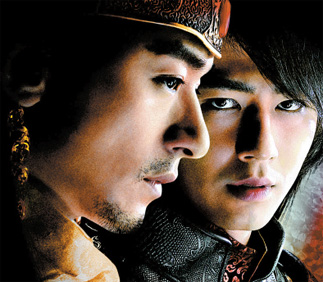 The local film industry used to neglect the subject of eroticism. It wasn’t until after the millennium that expressions of sexuality became more liberal.

But scenes depicting overt sensuality were always frowned upon. A Portrait of a Beauty, however, changed everything.

While “The Painter of the Wind,” a television drama about the same Joseon artist that ended last month, focused more on the mysteries and intrigue of the era, the film focuses more on romance.

In the film, Shin, who was in reality a man, is portrayed as a woman. Kim Hong-do (Kim Young-ho), another Joseon painter, falls in love with her.

Though dubbed by some as “obscene,” the film attracted 2.21 million viewers as of yesterday.

A Portrait of a Beauty is expected to hit the three-million-viewer mark in the next few weeks.

A Frozen Flower, which will be released at the end of this month, has some equally eyebrow-raising sensual scenes.

The story is based on the secrets of the royal family during the Goryeo Dynasty. It tells the tale of a love triangle involving the king (Joo Jin-mo), a knight (Jo In-sung) and the queen (Song Ji-hyo).

What makes this story particularly controversial is the characters’ violation of royal family protocol and their pursuit of both homosexual and bisexual love.

In fact, director Yoo Ha said he deliberately pushed the envelope with this film.

He said, “Provocative scenes were inevitable since the film itself was all about physical love.”

Experts say the two films - both based on history - intrigue audiences even more since they are both set in a time of sexual conservatism and suppression.

There are more sensational films coming up next year, like Park Chan-wook’s “Thirst,” starring Song Kang-ho and Kim Ok-bin.

Critics say the exploring of eroticism in local films is a market strategy to attract moviegoers to cinemas.

“The greater the economic depression, the bigger the desire or the issue of sexuality grows.”

But Oh worries about its aftermath.

“Film producers shouldn’t use eroticism as a means for popularity or for films to rank top at the box office,” he said.

“Rather, sensual films should look back upon social changes in the history of Korean films for the better.”