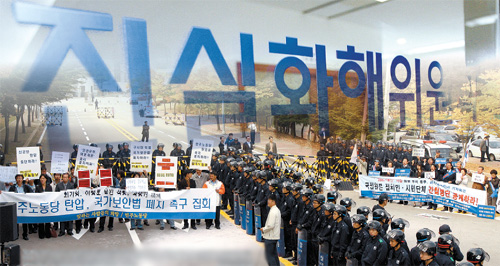 Top: The Truth and Reconciliation Commission will be dissolved in 2010 unless it is granted an extension.Bottom: Conservative and liberal civic groups protest take opposite views on the National Security Law in a protest near the National Intelligence Service building.[JoongAng Ilbo]

Reopening old wounds or finding the truth?
A spy incident involving a North Korean honeytrap that rocked the country earlier this year served as a good reminder that the Koreas are still technically at war, even though more than half a century has passed since hostilities ended in an armistice.

A byproduct of this long tradition of espionage is also a long list of those falsely accused of spying for Pyongyang.

Being branded as a spy has turned the lives of countless people upside down as longtime friends and families turn their back on the “traitor.”

But the Truth and Reconciliation Commission has, since 2005, played a pivotal role in reversing the fortunes of these unfortunate men and women as it makes recommendations for retrials in cases it determines the original decision was wrong.

The latest victory came two weeks ago when the Gwangju High Court acquitted nine former and current teachers of the Gunsan Jeil High School, who had served anywhere from one to seven long years in jail on trumped-up spying charges. In June last year, the commission recommended a retrial.

In 1982, during the reign of former President Chun Doo Hwan - an army general who seized power in 1980 in a coup d’etat - students left a book of poetry by Oh Jang-hwan, who had defected to the North, on a bus.

The bus assistant promptly alerted the police and the teachers were indicted for praising communism and conspiring to commit treachery. Their students were forced to testify against them. 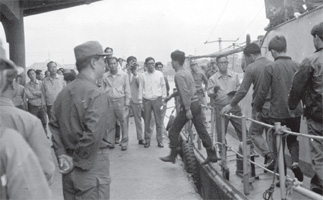 South Korean fishermen kidnapped by North Korea in the 1970s are returned. Past administrations have fabricated spy charges against former abductees. [JoongAng Ilbo]

The court initially returned a verdict of not guilty, but Chun’s wrath was enough to overturn the verdict in a second trial.

Park Cheol-eon, who held ministerial posts and was a powerhouse during that administration, wrote in a 2005 memoir that when Chun heard the initial verdict, he was furious, asking if the presiding judge had lost his mind.

As a result, for the wrongly accused teachers, it has taken 26 years to get the truth out.

“I am still in doubt whether all this is really over,” said Cho Seong-yong, one of the teachers. “The prosecutors told us they will not appeal but we haven’t celebrated or anything like that. We are still holding our breath. Until it’s really over it’s not over.”

Cho has no idea whether his name will be removed from a government blacklist of people who have broken the National Security Law.

“Even during the democratic Kim Dae-jung administration, lawyers and scholars would tell me that our case was too complex and that we would have no chance to get acquitted because there was really no legal procedure in place to reinvestigate. We had no hope,” said Cho.

For some, the wait was even longer.

After over two years of investigation, the court concluded last month that Seo Chang-deok was another victim of political shenanigans. The commission had recommended in December of last year a retrial in favor of Seo.

Seo, a fisherman, was abducted by North Korean naval vessels in 1967 while fishing near Yeongpyung Island and returned to the South after four months of captivity.

Seventeen years after the abduction, he was charged with having received espionage training in the North and sentenced to 10 years in prison, of which he served seven.

North Korea’s track record in kidnapping South Korean and Japanese citizens has not helped the falsely accused. The abductions have led the public to believe that some of the accusations of espionage were genuine.

Japan is, to this day, still trying to resolve the mystery surrounding the kidnapping of its citizens in the 1970s and 1980s by the North, which used the abductees to train its spies in Japanese language and culture.

Justice has finally arrived for Seo, but it will take some time to piece his life - or what’s left of it - back together.

“Four days after I was acquitted, my son, who had said I was a communist and disavowed me as his father, called me. He said he was sorry,” said Seo, 63. He has seen his sisters since the acquittal, although not his son yet.

“I am just happy it’s over. All this time my life was put on hold. I can move on.”

His lawyers are currently seeking compensation for his suffering, but Seo said he does not care about the money.

According to civic groups, Seo’s case was a textbook example of past military regimes fabricating spy cases on a need-to basis whenever the ruling power needed a boost in its approval ratings. Research by civic group Minkahyup estimates that during the 1970s and ’80s, 14 other fishermen shared the same fate as Seo and served long jail sentences.

“He was a victim of the time. He was uneducated, a poor fisherman that nobody really cared about. An easy target to take the fall,” said Park Young-il, an official with the commission. The commission has so far resolved three cases involving abducted South Korean fishermen. Two cases are still pending.

During the early days of democracy in the 1980s, government intervention to cement central power took various forms. In recent years, former commandos trained to infiltrate the North have admitted publicly that they have been deployed on domestic missions to steal sensitive material from opposition leaders such as former President Kim Young-sam.

Nevertheless, although the commission has brought forth the truth on some shady plots of the past, the Lee Myung-bak administration has hinted that in July 2010, when the commission’s mandate expires, the commission will not be granted an extension.

Shin Ji-ho, a Grand National Party lawyer, has already submitted a bill to the National Assembly asking that the commission and a dozen other similar bodies be consolidated into one, which would see a decrease in funding and personnel. He argued that the committee served to provide senior officials with a cushy job and was a waste of money.

Park Young-il, an official with the commission, said it is swamped with requests -10,972 and counting - from people demanding justice after decades of silence.

The commission deals with issues ranging from government atrocities committed against citizens in the past to human rights violations that may have occurred during the Korean War or previous administrations.

So far, it has investigated 3,650 cases and issued truth verification decisions on 2,177 cases. On cases involving torture or fabricated accusations of spying, 623 requests have been made, of which 20 have been resolved.

Officials say that most cases require at least a year of investigation, while some have taken as long as three years and are still being investigated.

The commission comprises about 50 officials, each working on about a dozen cases.

Investigations are based on court records, newspaper articles, and witness interviews, including those accused of perpetrating torture or fabricating evidence.

“Most of the time when they are asked for an interview they come in, but the majority deny that they have tortured anyone or falsely planted evidence. In some cases, they admit their wrongdoings but it’s rare,” said Park.

He added that the committee can impose a fine of 10 million won on those who fail to attend their interviews, but there are no jail sentences. “These people don’t face criminal charges. “

Apart from the shortage in manpower and funding, the commission, which was established under the former Roh Moo-hyun administration, is also in a race against time that it cannot win. It has to conclude its activities by July 2010 unless its extension is granted by a special committee that consists of lawmakers and government officials.

“At some point you have to ask yourself when to stop. We can’t go on indefinitely chasing ghosts from the past,” said a government official, speaking on condition of anonymity.

“If you keep poking old wounds, they will never heal.”

But proponents argue that the commission’s work is both important and necessary.

“The committee activities are not only to settle the grievances of individual victims, they also function as preventive measures against a recurrence of the same sort of incidents in the future,” said Dr. Kim Sung-soo of the commission.

South Korea is not alone in trying to confront its past and bring about justice. When apartheid was abolished in South Africa, a Truth and Reconciliation Commission was set up.

In the aftermath of World War II, when Korea gained its independence from Japan, many collaborators were brought to justice but many others remained influential. Thus, the roots of social division were never really removed.

The Korean War and successive military regimes only added to the complex web of conflicts between various interest groups. The division of the Korean Peninsula has also contributed to the difficulties in resolution.

Observers says that the ultimate test for the country will come when a final decision is made on what to do with the National Security Law, which is viewed by conservatives as one of the main bulwarks against the North but much dreaded by civic groups and the liberal camp.

“We have seen what this law can do to innocent people. Entire lives are destroyed,” said Jeon Sang-jin, a professor of sociology at Sogang University. “It was a tool that was clearly abused.”