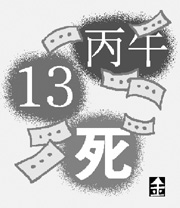 The Savoy Hotel, built in 1899 by Richard D’Olyly Carte, is one of the most prestigious hotels in central London. Book a party for 13 at the hotel’s famous Savoy Grill, and you will be joined by an extra guest, Kaspar, a three-foot black cat sculpture. The cat enjoys a full place setting and keeps the guests company through the last serving of dessert. The tradition began in 1898 when Woolf Joel, a South African businessman, threw a dinner party where only 13 were able to attend. Three weeks later Joel was fatally shot following his return to Johannesburg. From then on the hotel had a staff member sit with all groups of 13 until Kaspar the Cat was created in 1920 especially for the superstitious job.

While such triskaidekaphobia - irrational fear of the number 13 - is common in the Western world, tetraphobia, or fear of the number 4 - phonetically similar to the word for death - is widespread in East Asian countries. University of California, San Diego sociologist David Phillips in his study of 7 million deaths in the United States that occurred between 1973-1998, discovered that the death rate among ethnic Chinese and Japanese from heart-related diseases on every 4th of the month was 13 percent higher than that of American whites.

Superstition also affects births. Traditionally the year of the fire horse, Hinoe Uma, which comes every 60 years, or in 1846, 1906 and 1966 in recent history on the Chinese zodiac, has been deemed bad luck in Japan. Females born that year are particularly believed to carry bad luck. A study by Kanae Kaku showed that birthrate plunged 25 percent in 1966 from a year earlier. In addition, death reports of females born that year from accidents and drug and physical abuse were significantly higher. Kaku concluded that birthrates, abortions and infant deaths were affected by superstition.

A Seoul court recently ruled that plaintiffs can receive 60 percent of their money back from fortune-telling frauds. The gullible were apparently 40 percent to blame. But only extreme desperation would have sent the 13 victims to spend 250 million won ($173,604) on fortune telling. They are joined by many more in Korea where fortune-tellers are sought, from predicting the outcome of presidential elections to college entrance results.

Superstition breeds hope among those who have little else to lean on. But it also comes with a high price tag. One thing is a fact: The more you rely on superstition, the thinner your pocket becomes. Ordinary people cannot afford to spend extravagantly on superstitions like those frequenting expensive restaurants at five-star hotels.