A melodrama of dreamy blood suckers

A melodrama of dreamy blood suckers 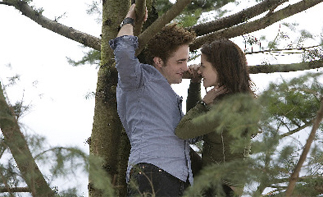 Stephenie Meyer’s “Twilight” teen romance novels are polarizing. Some of my friends voraciously whipped through the thick tomes, whereas others can’t refrain from launching into bitter tirades about all their faults.

But after seeing Twilight the film, I’m in neither camp. When you’ve devoted just two hours, instead of the time it takes to pore over 544 pages, a less passionate reaction is expected.

Twilight is meant for teen girls, but judging by the surprisingly full theater on a weekday morning, the film is drawing audiences from both sexes and many age groups. But for what Twilight aims to be - a serious teen romance - it’s perfect.

Adolescence is a period marked by intensity; hormones are raging and everything seems like it’s meant to last forever. So for those young people embroiled in such a romance, or dreaming of one, putting yourself in Bella’s shoes is easy - which was Meyer’s intent all along.

Kristen Stewart, recently seen in the wonderful “Into the Wild,” does well as the nondescript brunette. She’s unassuming in every way, klutzy and not particularly friendly.

What makes the completely ordinary, rather reserved Bella remarkable, as much as I cringe while writing this, is that just about every male in the movie goes ga-ga over her. But, I suppose if you’re trying to create every insecure teen girl’s fantasy, it’s appropriate. And it’s even more appropriate that someone completely out of her league (and species) falls madly in love with her.

That person, obviously, is Edward. And young Briton Robert Pattinson in the role is the best reason to see Twilight.

When Pattinson’s got a film’s hair and makeup team devoted to him, he’s absolutely stunning. I felt my heart go a-flutter like a 14-year-old teenage girl’s every time he was on the screen.

For a teenager, or anyone who appreciates teenage love, Twilight is a dreamy, wistful affair. But unlike most vampire stories, the movie refreshingly tones down the sexuality, as the most hot-and-heavy scene is an age-appropriate kissing session. Figures, as Meyer is a Mormon housewife.

Alas, to the adult viewer, Twilight is not without fault. The special effects can only be described as poor. In one scene, Edward is meant to look as if he’s made of diamonds, but at first, the lighting washes out any effect of the shimmer that’s been slathered onto his body. Then as the camera pans over him, we see the glitter - which looks like it came straight from “Labyrinth.”

Also, achieving the effect of Edward’s super-speed comes at a price: Strung up by wires, Pattinson makes running motions with the cinematic equivalent of cartoonish “speed lines.”

Finally as an adult who knows better than to think that teenage love is everlasting, the dead serious nature (pardon the pun) of Twilight feels questionable. As Bella and Edward get wrapped up in their fated love, she’s willing to give up her mortal life for him after what, one makeout session and a few dates? It’s just lunacy.

But if lunacy is what you’re after, stay tuned for the release of the saga’s second film, “New Moon.” I know I’ll be anticipating it - if only to drool over Edward.