Catch the Nakwon Arcade before it goes

Catch the Nakwon Arcade before it goes 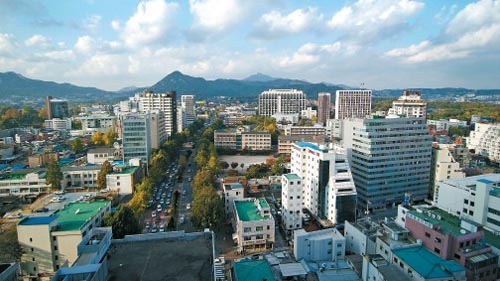 A shot by Lee Si-kwon of the area surrounding Nakwon Arcade on exhibit at the upcoming event. Provided by the organizer


It seems that every day, some new building or other pops up with the incessant development that goes on in this city.

And now the Seoul government’s development plans for the city center could impact the future of the Nakwon Arcade, a haven for the musically inclined and once a popular cultural space.

Although no specific plans have been announced for the area, the thought of losing the Nakwon Arcade, which has been a big part of the local music scene since opening its doors to the public in 1968, has alarmed many. So Culture Commune, a cultural organization, is putting on an exhibition titled “Cityscape Trust #6 Nakwon Arcade Document” at Insadong Dream Gallery. Sajin and Youngsang, a photography and video company, and volunteers, are also chipping in.

The organizers hope to highlight the sights of the neighborhood and surrounding areas, and the cultural value of the Nakwon Arcade.

The exhibition will consist of photographs and video clips of the arcade.

“We have prepared the exhibition to inform people of the cultural value of the arcade,” said Byeon Yoon-do of Culture Commune’s PR department.

“It’s a way for us to keep a record of the cultural space.”

According to Dream Gallery, the exhibition will consist of photographs of the building and interior shots of shop owners going about their daily routines. Video footage of the exterior and interior of the arcade, as well as interviews with shop owners, will be shown. Nakwon Arcade contains over 200 shops selling musical instrument shops and a movie theater (previously Hollywood Theatre and now Seoul Art Cinema).

It once had a bowling alley and a dance hall, serving as the place to be for musicians and fun-seekers in the 1970s and ’80s.


The exhibition is on Dec. 18 through 23. Admission is free.

Insadong Dream Gallery is located near Anguk Station, line No. 3.