How Korean people used to live, and not that long ago either

How Korean people used to live, and not that long ago either 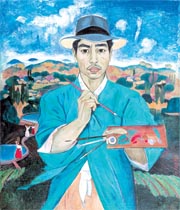 So it’s not surprising that the historical traces of these hard times are reflected in the arts.

An exhibition titled “The Modern Korea Rediscovered” at the National Museum of Contemporary Art in Deoksu Palace, central Seoul, will offer a glimpse of the ups and downs of these times.

“Though early 20th-century paintings are historically significant, they were very poorly documented,” said Park Young-ran, the exhibition’s organizer. “With the social and political instability, many paintings were lost.”

So one of the goals of the upcoming exhibition is to raise public awareness on preserving these works.

“Rather than presenting a periodical ideology, the exhibition tells stories of life episodes,” Park said.

For example, Yi Kwae-dae’s “A Self-portrait in a Durumagi” is an oil painting of Yi wearing a durumagi, or traditional topcoat, and a felt hat. Yi’s face - especially his eyes - show an expression of firm faith as well as great sadness.

Yi, who crossed over to North Korea after the Korean War, faced an identity crisis, art experts say.

Park Soo-keun’s “A Girl Holding a Baby,” also reflects contemporary history. It’s unusual today to see a young girl carrying a baby on her back, but in the past, that’s how siblings looked after each other.

“The paintings portray the lives of modern Koreans who went through troubles but still were hopeful,” Park, the organizer, said.