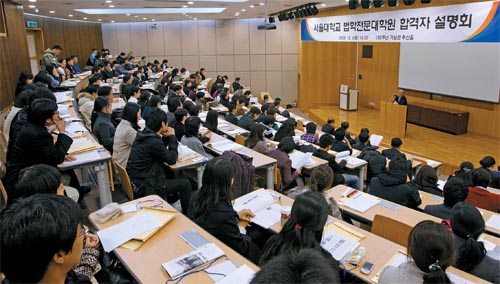 Former president of the Constitutional Court, Kim Young-jun, gives a lecture at the 100th Anniversary Memorial hall to the incoming class of the Seoul National University law school on Dec. 6. By Choi Jeong-dong.


U.S.-style law schools are slated to open in March next year, but experts are still divided on whether admissions policies are working.

The aims of law school admissions are to nurture experts in a variety of fields of law, support regional development and provide those in their 30s and 40s with an opportunity to seek a second career.

In terms of the proportion of non-law majors accepted into the schools, the policy appears to have succeeded.

According to the Korean Association of Law Schools, 67 percent of the new cohort did not major in law at the undergraduate level. 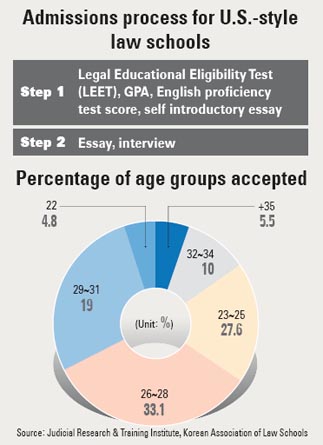 In that sense, the goal of the Korean Association of Law Schools to select over a third of the incoming class from non-law majors was a success.

The law schools are also providing a new route for those with experience in various fields to start a second career. This year’s intake includes civil servants who participated in the FTA agreement. Furthermore, accountants, doctors and electronics researchers also made the cut.

But the representation of candidates in their 30s and 40s was lower than expected. The majority of those accepted - 79.7 percent - are in the 23 to 31 range with a mere 5.5 percent of over-35s. The oldest candidate admitted to Seoul National University is 33, while Yonsei University’s is 38 and Korea University’s is 35.

This is disappointing considering the so-called law school boom, or the popularity of law school entrance prep among middle-aged workers.

Another problem was the overly large percentage of undergraduates from Seoul admitted to law schools in regional areas.

Lee Jae-yeol, the director of a law school prep academy, estimates that the law schools based their admissions standards on those who have a higher chance of passing the Korean bar examination, which is required upon graduation to practice law.

While there’s room for improvement, it’s hard to judge the system this early on. In order for the new law school system to successfully replace the old system, there needs to be a solid support system to prevent failure.