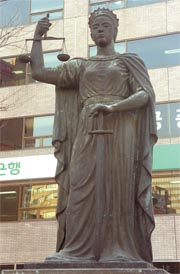 The attempt to change the face of Korean law begun.

The 25 new U.S.-style law schools on Dec. 5 released their lists of new students. Among the 1,998-strong lineup are some unusual candidates, including a poet and a doctor.

In fact, many of the new intake have experience in fields as diverse as veterinary medicine, human rights counseling and broadcasting.

It will be interesting to see if these law hopefuls will be able to initiate changes in a judicial circle which, until now, has mostly been made up of people from similar educational and social backgrounds.

Some of them, at least, are certainly not your typical desk-bound office types.

When she was contacted for this interview, Song Ji-hyun, 47, a poet and doctor of Korean literature from Gwangju, said she was in the middle of kimjang, or kimchi-making, with her neighbors for the winter season.

Song sees herself as an excellent multitasker. She has been teaching Korean to international students at her alma mater, Chonnam National University Language Education Center in Gwangju, for the past nine years. She also lectures part-time at Chosun University.

After earning her Ph.D. in feminist studies in 1991, she proceeded to have her first poem published in the monthly Simunhak magazine in 2003.

Work aside, she often has her hands full with family - her law professor husband, three children (two boys and a girl) and mother-in-law. 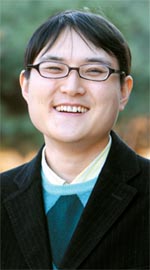 As she prepares to enter law school in March, Song has a new set of challenges. She is the oldest student accepted to the Chonnam National University law school. Most of her 120 fellow students will be in their 20s and 30s.

“I am excited to be a grad school student again at my age but am also worried about competing with students who are half my age, who are smarter and more eager than me.”

Her reasons for applying to law school are simple.

“I wanted to lead a different life. In the future, rather than focusing on academic research, I want to focus on practical research and social activities.” 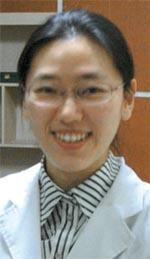 So how did she beat out candidates half her age? She believes her educational background and relentless efforts to improve herself were the deciding factors.

Song enrolled at the Korea National Open University department of law in 2004. When she wasn’t in class, she caught up on current affairs and read books.

Because she had spent some time in the U.S., she did not have to worry about improving her English proficiency test scores. Her Toeic score is a solid 930.

To prepare for the law school entrance exam, Song watched video clips of lectures provided by her alma mater and studied with other candidates sitting the exam.

“My biggest fear was that my age would be a negative factor in the admission process. Surprisingly, I think the selection committee was fair and did not have any biased opinions,” said Song.

Looking to the future, Song hopes to work for an NGO or a law firm specializing in social enterprises.

Song offered some encouragement to other people looking to take on a new challenge in life.

“Do not relent if you’re serious about pursuing a new challenge in life. If you have the desire, age is of no concern. Just challenge yourself.”

Another person who beat the odds is Kim Jae-wang, 31, a blind counselor at the National Human Rights Commission of Korea who has been accepted to Seoul National University’s law school.

Kim was once a biology grad student at SNU with a promising future. But one day, he suddenly noticed that he could no longer make out the words in his textbooks.

An eye examination revealed irreversible damage to 90 percent of his optic nerves. His goal of becoming a biologist was suddenly shattered.

After withdrawing from his grad studies, he holed up at home, fearful about the future.

Kim clung onto the hope that his sight would improve, but his deteriorating vision eventually resulted in blindness. He spent the next year in despair.

In February 2005, Kim finally hauled himself out of the doldrums and began working as a phone counselor for the National Human Rights Commission of Korea. A friend who worked there had recommended the job.

He soon learned there were a large number of people in need of help out there.

Earlier this year, a co-worker and his wife encouraged Kim to apply to law school.

Kim started by studying for the Legal Education Eligibility Test. He found suggested topics and practice questionnaires, had them changed to text files and then used a screen reader to enable him to study.

He joked that this program was “just like a wife” in helping him achieve his goal.

Kim took the LEET test in August on a computer, an exception made by the Korean Association of Law Schools.

During his admission interview, the professors on the panel asked Kim what he wanted to do in the future.

“While working for the Human Rights Commission, I counseled people in difficult situations. I hope I can reach out to such people with my knowledge of the judicial system,” Kim replied.

While he has been beaten the tough ten-to-one odds of being admitted to law school, he knows this is only the beginning.

“I am worried about how I’m going to get to and from campus but what concerns me the most is whether I can complete law school within three years.”

But those who know him believe in his potential. The director of the Human Rights Commission and formerly of Seoul National University’s department of law, Ahn Kyung-hwan, is one of them.

“There is a blind lawyer in Japan. I hope you can be a role model for others in similar situations here in Korea,” Ahn told Kim upon hearing of his admission into law school.

And Kim’s not the only person taking a completely different path into law.

Kim Yu-na, 29, an anchor with MBN TV has been accepted into Chung-Ang University’s law school.

She studied Chinese culture and business management at Sogang University, and started her journalism career as a TBS traffic reporter.

She wants to make good use of her Chinese language skills as a lawyer who handles problems that arise out of cultural misunderstandings between Korea and China.

It seems like a future well-suited to her educational background - she studied at Heilongjiang University in China for a year as an exchange student.

Chung-Ang University law school’s curriculum, which includes entertainment law, media law and culture-related law, appeals to Kim as she has been in these fields for the past six years.

Her dedication to volunteer work, in particular her work reading to the visually impaired, scored favorably with the selection committee. Kim plans to continue volunteering in the future.

“First, I must gain fundamental knowledge of the law but I want to become a lawyer and member of the media with the ability to provide solid analytical analysis in my field.”

Lee Sun-mi, 23, is a qualified doctor and has just been accepted to Ewha Womans University law school. A gifted student, Lee had always done exceptionally well in school.

She entered elementary school a year earlier than her peers and graduated from a specialized science high school in two years instead of the usual three. She went on to Seoul National University.

Earlier this year, she made news as the youngest person ever to pass the medical license examination.

But ever the maverick, Lee did not join a hospital as a lowly intern. Instead, after graduation, she opened her very own clinic in April.

She quickly gained a reputation for treating neuralgia and pain, and was even featured in a medical journal.

For Lee, who makes all her achievements look effortless, her admission to law school was no different. She claims she only spent two to three hours a day after work studying.

“Although treating patients at my clinic is a meaningful job, I don’t want to be like all the other doctors.”

Lee Jong-wook, who served as the director-general of the World Health Organization from 2003 to 2006 is her role model. She says she was also influenced by lectures she attended during her years as a medical student by doctors who had gone on to become civil servants, journalists or lawyers.

Yoon Ki-sang, 28, a veterinarian by profession, has received letters of admission from Kyungpook National University and Ajou University.

Upon graduating from Kyungpook National University’s college of veterinary medicine, he worked for a beef import company. He hopes to become a lawyer in the field of food imports/exports.

“I learned of unsafe foods being imported from various places when I worked at the beef import company, resulting in consumers being victimized,” said Yoon.

Park Sang-hyeon, 31, is a policeman who has gained entrance into Chungbuk National University law school. The Korea National Police University graduate served on the riot squad and worked a as lieutenant in Jaecheon, North Chung-cheong Province.

Citing the suicide of the actress Choi Jin-sil as an example, Park believes science and technology and human rights issues will intertwine in the future.

Rumors spread on the Internet are said to have been a contributing factor to Choi’s death.

“Since Chungbuk National University law school offers specialized courses in science and technology, I look forward to studying both technology and human rights-related topics in the future.”