Heading south for sunsets and serenity

Heading south for sunsets and serenity 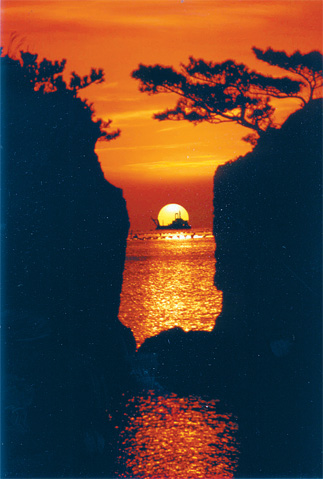 A view of the sunset from Hyangiram

If you didn’t manage to catch the summer foliage putting on its cloak of vibrant autumn hues this year, don’t worry. A winter journey will give you an equally grand landscape.

A trip to Namhae, South Gyeongsang, and Yeosu and Suncheon, both in South Jeolla, offers breathtaking beauty. Feast your eyes on beautiful forests and the vast sea on the drive down from Seoul.

And though the beaches may seem lonely without the hordes of summer vacationers, the silence brings calm to your heart.

I left home for Namhae before dawn in order to arrive at 1 p.m.

Namhae, off the southern coast of the peninsula, is Korea’s fourth-largest island. But with Namhae Bridge now connecting the island to the peninsula, it’s now considered part of the mainland. 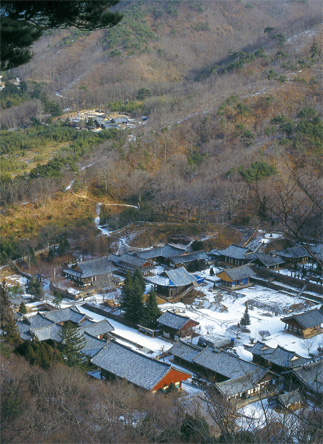 My destination is Mount Geum, which means “Gold Mountain.” It is located in Sangju-myeon, on the southernmost tip of Namhae, and affords a spectacular view of the sea.

The mountain, which is 681 meters (2,234) above sea level, features in a legend related to the founding of Joseon.

It is said that Lee Seong-gye, the founder and first king of the Joseon Dynasty, offered prayers at the mountain for 100 days.

Soon after, with the power vested in him from the mountain gods, Lee established a dynasty.

To thank the gods, he wanted to adorn the mountain in silk fabrics, but this was, of course, impractical.

So he changed its original name - Mount Bogwang - to Mount Geum instead.

Sitting at the top of the mountain is Boriam, a branch of Ssanggye Temple. Ssanggye Temple is one of Korea’s three major sanctuaries of Buddhism along with Naksan Temple in Yangyang, Gangwon and Bomun Temple on Ganghwa Island in Incheon.

If you enjoy hiking, you can ascend on foot but the majority choose to drive up. There is a shuttle bus near the parking area that takes you up the mountains in 10 minutes. From the drop-off point, it’s a 15 minute walk to Boriam. 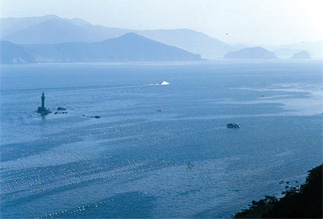 On the shuttle bus, I overhear tourists complaining that the bus fare - 2,000 won for a round trip - is unreasonably expensive. Their complaints seem to me to be valid since it isn’t that great a distance.

Although silence is a cornerstone of temple living, pockets of chattering tourists make the entrance of Boriam almost chaotic.

Boriam is nestled into Mount Geum. The mountain is covered with fantastic rocks and stones, and surrounded by the Hallyeo Haesang National Park.

At the temple’s entrance, a post inscribed with a poem titled “Namhae Mount Geum” by Lee Seong-bok catches my eye. Lee writes, “A woman is buried in rocks ... And I’m standing alone on Mount Geum in Namhae under the blue sky. I sink alone into the blue sea of Mount Geum in Namhae.” Anyone who’s ever had their heart broken cannot help but feel sympathy.

Boriam is small compared to other Buddhist temples. Bogwangjeon, the temple’s main building, is surrounded by jagged rocks.

Going up the stairs at the center of the main building, there is a small statue of a mountain god on the left.

On the right is another Buddhist statue that is believed to make wishes come true.

To the left of the compound is Seoneun Temple, where Lee Seong-gye is said to have prayed.

The small temple area is crowded with tourists. It makes me feel almost sorry for people who have come in hopes of meditating.

But the scene that unfolds as you stand in front of the temple is more than enough to soothe any ruffled spirits.

Looking out from the entrance of the temple, you’ll see a collection of islands, known as the Dadohae of Hallyeo Haesang National Park. “Dadohae” literally means “sea of many islands.”

It takes 10 minutes by foot from Boriam to reach Mount Geum’s peak.

I bid farewell to Boriam and head to Hyangiram in Yeosu, South
Gyeongsang. 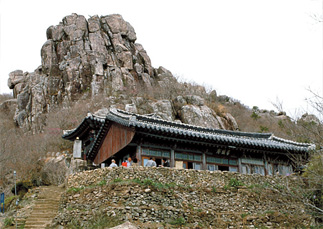 On your way, you pass Daraengi Village in Namhae. It’s an area with layered rice paddy fields, and a picturesque spot from which to take photos of the countryside landscape.

Snapping away, I lose track of time and suddenly realize that the sun is about to set. The best place to enjoy the sunset is Hyangiram.

Hyangiram is said to have been founded by the monk Wonhyo (617-686) in 644. The temple’s main building, which was completed in 1986, is located in Mount Geumoh.

“Geumoh” means “golden turtle.” The temple is located at the very south of the Yeosu peninsula, which is said to resemble a gold turtle entering the sea. Hyangiram is located in the turtle’s body.

Mount Geumoh is 323 meters above sea level. You can drive to the temple gates and climb several flights of short, but very steep steps, to the entrance.

Hyangiram is shaded by a camellia tree, one of the prides of Yeosu. An astounding view greets you at the gates. The rocks are lined up side by side, allowing only one person to walk at a time. They formed this way naturally. It’s like heading inside a cave. A few steps later, though, a panoramic view of the sea greets you.

Every New Year, tourists flock to this spot to take in the spectacular sunset. If you arrive early enough, you can see the red sun setting above the blue Namhae sea.

Personally, though, I would recommend a more unique sunset, like the one seen in the Himalayas. I’m told that you get a more beautiful view when you’re not facing the sun.

Instead, there is an amazing view when you turn your eyes to the snowed-capped Himalayan mountains, which reflect the burnished sun.

And you can get a similar experience here. The light radiating from the sun is reflected in the small rocks everywhere in Hywangiram, creating a lively and vivid red bath.

The trees also add to the picture with their shades of color. To a photographer, it’s almost paradise.

When you lie back on one of the rocks and enjoy the scenery, there is, for an instant, nothing else that you desire.

The thought that this is where Wonhyo prayed is another reason to long for a world free from all desires and ideas.

Songgwang Temple is said to have been built in the late Silla period. It features several national treasures.

Instead of tall or large edifices, there are simple wooden buildings, all the same size. Here, anyone can ask for a temple meal and participate in a temple stay.

The temple yard is quite different from the ones at Boriam and Hyangiram. They’re not along the cliff but enclosed, stirring a listlessness in the heart.

I like the narrow path that leads you on a 20-minute walk to the temple from the parking space.

Walking down the alley, I’m surrounded by leaves. Breathing in the fresh forest air, surrounded by the sunlight, I too feel like a tree.

Hwang Dong-gyu recently wrote, “The trees with falling leaves aren’t all that sad. They have done all their work for the long year. It’s O.K. to empty out.”

So I empty out as well for the bright future up front.

For Boriam in Namhae, South
Gyeongsang, take a bus from Nambu Bus Terminal to Namhae. There’s a local bus that goes to Mount Geum.

For Hyangiram in Yeosu, South Jeolla, take a bus from Express Bus Terminal to Yeosu. Take a local bus from there.

For Songgwang Temple in Suncheon, South Jeolla, take a bus from East Seoul Bus Terminal to Suncheon. Take a local bus from there to the temple.

All trips take over five hours.