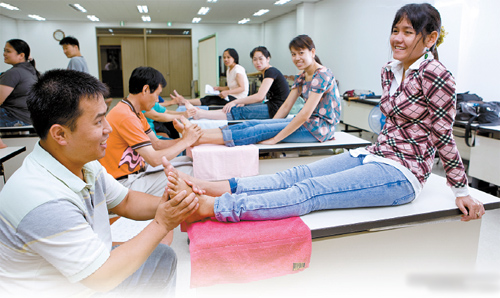 Local men and their foreign wives during a couple’s therapy program. Provided by Rainbow+ Magazine

Every Saturday, Shin Gang-chul attends a Vietnamese language class arranged by a local civic group. He and his eight other Korean classmates, all men aged between 40 and 60, have a common goal: to communicate with their foreign brides.

The students gather once a week in a small lecture room at a migrants’ shelter in a busy working-class neighborhood in northern Seoul. For two hours, they learn to speak, read and write Vietnamese. After class, over shared platters of goi cuon - Vietnamese spring rolls - and tea, they discuss problems in their marriages stemming from different customs and family traditions.

But among many Korean males married to Southeast Asian women - a group that has dramatically grown in numbers here in the past five years - learning the bride’s language was long considered unnecessary.

It is usually the brides, from countries like Vietnam, the Philippines or Cambodia, who have to pick up their husbands’ customs and assimilate into the Korean family tradition as they marry rural or less-educated Korean men who have had trouble finding wives from their own country. 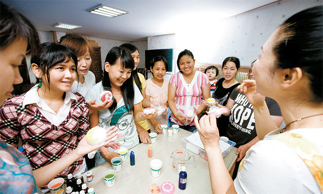 But this attitude is slowly changing among some Korean men and their families who, like Shin, have realized that cultural understanding works both ways.

“I want to send my child to a Vietnamese school when she grows up,” he says, referring to the couple’s 1-year-old daughter. “It’ll be a huge advantage for her to speak two languages.”

Eight out of 100 Korean males married foreign women last year, according to data from the Korea National Statistics Office. In rural areas, up to 40 percent of marriages involved an international bride.

Shin and his wife, Ngyen Thi Hien, are among them. They first met three years ago in Dong Nai, an industrial province northeast of Ho Chi Minh City, through a Korean broker.

But unlike many other Korean men in similar situations, Shin decided to take his wife’s roots more seriously when they tied the knot. He’s even made a family business out of it.

Two months ago, the couple opened a Vietnamese restaurant in northern Seoul, and invited Ngyen’s mother to be the head chef.

Now the family - including the couple and both sets of in-laws - live in the same house in Seoul.

“I am glad that he’s learning Vietnamese,” says Ngyen. “It’s not something many of my Vietnamese friends here can expect from their Korean husbands.”

The pressures foreign wives once faced to quickly assimilate into the domestic culture and function as a Korean family member are slowly diminishing in some homes.

“It’ll always be a given that foreign brides are a substitute for Korean wives in these marriages,” admits Kang Seong-Euy, secretary-general of the Women Migrants Human Rights Center in Korea, a watchdog for migrant women. 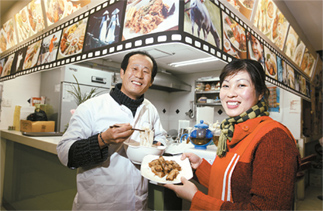 “But slowly more men are starting to think outside their culture and embracing their differences from their partners. For example, a lot of them are considering migrating to their wife’s country and settling down there after they retire.

Five years ago, this was unthinkable.”

The phenomenon is also increasingly evident in support programs run by the Ministry of Health, Welfare and Family Affairs, which has been offering administrative support like translation services of immigration documents, legal counseling and postnatal care for the new brides.

The ministry recently changed the official classification of marriages between Korean men and foreign women on all government releases and manuals from “a family of female marriage immigrants” to “a multicultural family.” Through this move, it hopes to shift the focus from the migrant’s adaptation to Korea to an international understanding.

For years, South Koreans have clung to the myth of racial homogeneity. The idea was evident in common Korean expressions like danil minjok, or “a unitary race” sharing the blood of one ancestor, Dangun, who founded Gojoseon (2333 B.C.-108 B.C.).

In a country with such strong ethnic sentiment, mixed-race children were constant victims of ridicule and prejudice until the issue was highlighted by celebrities like Hines Ward, a Korean-American NFL player.

Confusion about the meaning of a multicultural society is still prevalent here. But government policies, which used to view immigration through marriage merely as a strategy to counter the country’s aging society and declining birthrates, are slowly starting to take a new approach.

In the past, programs at migrant support centers were heavily focused on educating foreign wives about Korean customs, including etiquette, cooking and the preparation of ancestral rites.

But the new policies stress that the husbands, their families and society must also understand and embrace ethnic differences.

Included in the recently published manual for partners of migrant women released by the Multicultural Family Support Center - a department within the ministry - is information on eating habits, family values, community awareness, honorifics and the roles of parenting in the home countries of many foreign wives, including Mongolia, Vietnam and Uzbekistan.

The section on eating habits delves extensively into problems faced by Mongolian women when they marry Koreans, because common Korean foods like seafood are not usually eaten in Mongolia, while lamb, a main component of the Central Asian diet, is rare here.

The manual also taps into everyday dilemmas in a Korean-Vietnamese marriage. For example, while it is usual in the Vietnamese countryside to leave the front door open, Korean partners worry about theft or dirt getting into the house.

Filipino brides, on the other hand, often get told off for feeding children first at family meals, which is perceived by the Korean family as being disrespectful towards elders.

The manual encourages Korean men to participate more actively in domestic chores, because many foreign brides come from backgrounds where they are used to splitting family duties. 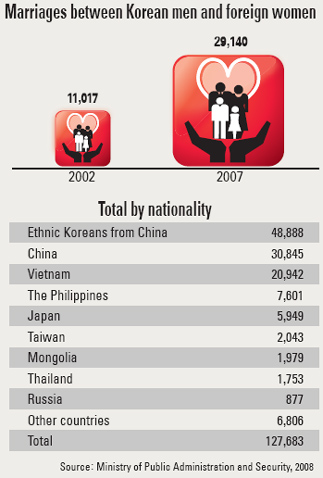 “Many of these women have values and attitudes in their homes that women are equal to men,” says Lee Hae-mi, an officer at the Multicultural Family Support Center.

“That clashes with the mentality of many conservative Korean men, who are used to dominating the family.”

Experts stress that partners need to be educated as the couples do not spend much time together before getting married, and brokers often lie about local conditions and the men’s financial status to the brides.

Miscommunication and conflicts between multinational couples often lead to domestic violence or divorce.

One out of four foreign women married to Koreans in the South Jeolla region have experienced physical violence or verbal abuse from their partners, according to the Gwangju Women’s Hotline. One out of 10 women in the same survey responded that they were subjected to violence on a regular basis.

Last year, Huynh Mai, a 19-year-old bride from Vietnam, was beaten to death by her husband. Her battered body, with 18 broken ribs, was found in the basement of the couple’s house in Cheonan.

The situation has gotten so severe that the Justice Ministry and the Ministry of Gender Equality has organized special classes for men planning to marry foreign women to learn about the legal and cultural issues involved. The speakers include representatives from women’s groups, immigration officials and couples.

The ministry is considering giving incentives, such as fast-tracking their wives’ application for Korean citizenship, to course participants.

This marriage 101 has been held twice a year so far but will be expanded to four times next year. The men are introduced to the basics of family management, from legal issues about marriage brokering to facts about female sexuality and ways to communicate with their partners.

Women’s groups believe that these classes should be made mandatory by law since too many female migrants put up with violence in an environment where legal support is largely unavailable to them.

“The main priority of the program is to prevent violence and enhance better communication among couples who speak different languages and come from different ethnic backgrounds,” says Kim Seong-cheol, an official at the Ministry of Gender and Equality.

“It’s designed to shift the awareness of Korean partners. To do that, they need to open up to their wives’ cultural roots.”

But the idea of forcing these husbands-to-be into the classroom is also seen as an infringement of their right to choose their partners.

Meanwhile, about 50 percent of Korean nationals said the country has become a well-functioning multicultural society, according to a recent survey conducted by the Korea Broadcasting System. But only 30 percent of women married to Koreans participating in the survey agreed that the country embraces multicultural views without discrimination.

“We need more software to enhance the multicultural index of our society, not just words,” says Kang Seung-ho, a counselor at a family support center for multinational families based in Suwon, Gyeonggi. “We need far more support centers and programs to help families adjust before we can be called a multicultural society.”

According to a recent survey, marriages between Korean men and foreign women take up 7.1 percent of all divorces in Korea.