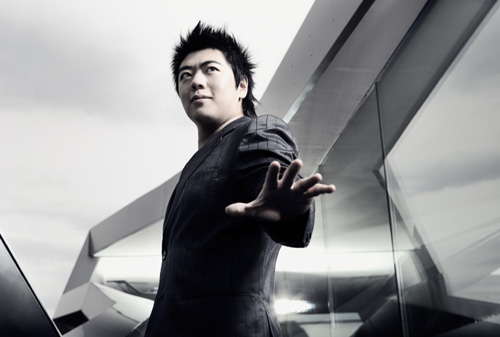 Chinese pianist Lang Lang performs in Seoul next week. Provided by the organizer

To pianist Lang Lang, music is like air. He just cannot imagine living without it.

After all, he starting playing the piano when he was only three. He could read musical notes before he learned the alphabet, he says in his autobiography “Lang Lang: Playing with Flying Keys.”

Today, the 26-year-old is an international star, dubbed “the hottest artist on the classical music scene.”

Flitting between his three homes - in Philadelphia, China and Berlin - he gives about 130 concerts a year around the globe.

In the beginning, Lang Lang made headlines for his dynamic, perhaps even showy, techniques, unexpected in classical music concerts.

But over the years, he has demonstrated musical knowledge and charisma that validate his youthful and energetic performances.

He’s proven himself to be a musician’s musician, and has been picked as the top choice for collaborations by the world’s celebrated conductors like Simon Rattle, Zubin Mehta and Wolfgang Sawallisch.

As with many youths, the dream of becoming a great pianist wasn’t really Lang Lang’s idea, but his father’s.

A member of an air force orchestra, Lang Lang’s father enforced a tough practice schedule on the young boy. He hoped that his son and only child would fulfill the dream he couldn’t achieve due to poverty and lack of means.

Upon starting school, he had to practice an hour before going to class, 45 minutes during his lunch hour and four hours after school.

“What [my father] didn’t understand, and I was too young to explain, was the relationship between watching television or having my mother read to me and becoming a great pianist,” Lang Lang said.

Lang Lang believes his imagination and the fantasies that stem from what little play time he had, as well as the sounds the piano makes have all contributed to making him the pianist he is today.

This mix of fun and music is exactly how, as a Unicef Goodwill Ambassador and chief of the Lang Lang International Music Foundation, he hopes to help children achieve their dreams.

Lang Lang will be coming to Korea next week for a one-day concert. He will be playing Mozart’s Piano Sonata No. 13 in B flat Major, K.333, Schumann’s Fantasie for piano in C major, Op. 17, and some traditional Chinese music.

Lang Lang came to Korea in September to perform with Italy’s La Scala Philharmonic Orchestra under the baton of Korea’s Chung Myung-whun. The program, which included Rachmaninov’s Piano Concerto No.2 in C minor, Op.18, received rave reviews from the Korean public.