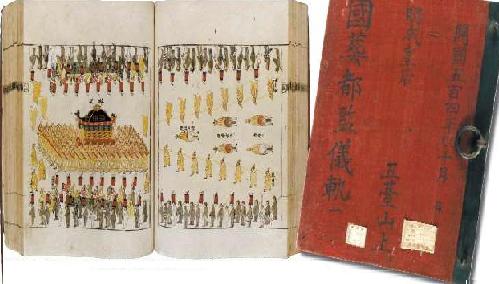 
On a hot summer day in July last year at Incheon International Airport, a group of Koreans looked tense. They were waiting for Koichiro Matsuura, director-general of the United Nations Educational, Scientific and Cultural Organization (Unesco) who was in the country for a forum.

Among the group were former politician Kim Won-wung and Hyemun, a monk from Bongseon Temple, both members of the Joseon Dynasty Uigwe Recovery Committee.

The civic group had come to ask for Matsuura’s support for repatriating Joseon Dynasty uigwe, the royal protocols for ceremonies and rituals.

Though uigwe are a cultural treasure unique to Korea’s Joseon Dynasty (1392-1910), the texts - 154 volumes in all - are currently kept in the Archives and Mausolea Department of Japan’s Imperial Household Agency, located in the Imperial Palace in Tokyo. The Joseon Dynasty uigwe are national records enshrined in Unesco’s Memory of the World Register along with the Joseon Wangjo Sillok, annual records of the Joseon Dynasty from 1413-1865.

Top: A royal protocol that has records on producing privy seals. Above: Mount Odae Archives where the uigwe were kept. [JoongAng Ilbo

While Japan returned 47 volumes of the sillok, loosely translated as “true” records, in 2006, it hasn’t returned the Joseon uigwe, which were kept in the Mount Odae Archives in Pyeongchang, Gangwon and Mount Taebaek in Gangwon Province until early 1913.

During the colonial period (1919-1945), Japan’s government in Korea removed the volumes from the archives and gave them to the Imperial Household in 1922.

The imperial household collections include Gukjangdogamdo, a pictorial record of state funerals. Four volumes are dedicated to Queen Min’s state funeral rites, which lasted for more than two years after her murder in Gyeongbok Palace, central Seoul, in 1895. The assassination was planned during the rule of Miura Goro, the Japanese resident minister in Korea at the time.

“It was the longest set of funeral rites ever [in Korea],” said Kang Moon-shik, a researcher at the Kyujanggak Institute for Korean Studies Archive, Seoul National University. The Kyujanggak Archives and the Academy of Korean Studies each have 2,940 and 550 books on royal ceremonies and rituals, respectively. Over 150 are still kept in Japan.

Min’s funeral could not take place right away because her body had been burned and her husband, King Gojong had fled to the Russian Legation. The uigwe contains images of the funeral.

When the Joseon Dynasty Recovery Committee visited the Imperial Household in 2006, the uigwe of the Queen’s state funeral was wrapped in a red hemp cloth and was well preserved. On the back page was written “Mount Odae Archives,” where the documents were previously kept, and there was a stamp dated 1922 identifying the Japanese government of Korea.

At the Imperial Household Agency there are also books of records on the procedures of how Joseon royal families made privy seals and 1,080 history books borrowed from Ito Hirobumi, a Japanese military governor, in 1907.

“It’s a pity that books meaningful to Korea are in Japan,” Kang says.

The Joseon Dynasty Uigwe Recovery Committee was set up in 2006. It has organized several meetings so far with the Japanese Foreign Ministry, including a highly anticipated encounter in 2007 with Hitoshi Kimura, senior vice minister for Foreign Affairs. 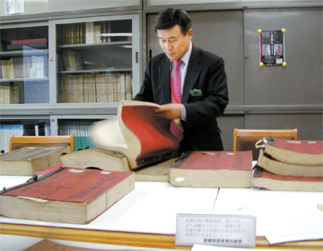 Former politician Kim Wonwung from the recovery committee looks through the pages of Queen Min’s state funeral rites at the Imperial Household Agency.

Kimura said the ministry’s foreign affairs department would try its best to return the cultural relics for the sake of amiable Korea-Japan relationship, “though Japan does not hold any legal responsibility” for the uigwe.

When the committee met with Unesco’s director general at the airport in July last year, Matsuura showed great interest in the topic. He said that while global movements to hand back cultural properties that had been taken from other countries are in process, the UN is keeping an eye on Korea’s uigwe. He said he would raise the issue at an upcoming meeting.

As promised, the issue was raised last month at the Intergovernmental Committee for Promoting the Return of Cultural Property to its Countries of Origin or its Restitution in case of Illicit Appropriation, or the ICPRCP. 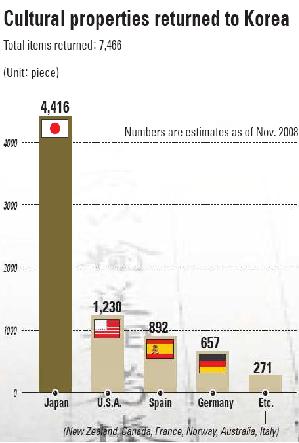 Representatives from the Korean government strongly urged that books sought from the royal library Oegyujanggak currently held in France and royal protocols kept at the Imperial Household Agency in Japan should be returned. There are currently 34,369 items of Korean cultural property in Japan, according to the National Heritage Administration, the highest number in the world, followed by the United States and the United Kingdom.

As of last month, Japan has returned 4,416 cultural properties to Korea, which raises hope that the uigwe will also find their way back to these shores.

In 1958, Japan returned 106 relics from old tombs in Changnyeong, South Gyeongsang, that date back to the Three Kingdoms Period (57 B.C.E.-668), after several rounds of Korea-Japan governmental negotiations. Also, the Tokyo National Museum returned 227 ornaments and items of jewelry worn by Yi Bang-ja, the queen of King Yeongchin and Joseon’s last crown princess, in 1991. Three years ago, Japan also returned Bukgwandaecheopbi, a Korean war monument originally erected in Hamgyeong Province in North Korea to honor the troops who stopped Japan’s military in 1592. A Japanese general removed the monument from Korean soil in 1905 and placed it at the Yasukuni Shrine in Tokyo. It is now back in North Korea.

South and North Korean Buddhist groups have also been cooperating on trying to get royal relics back from Japan. Last year, the South met with the North’s Korean Buddhist Federation in Mount Kumgang and agreed to make joint efforts. North Korea lays claim to a Buddhist scripture from the Hwajang Temple in Kaesong, North Korea, which is currently kept at the Tokyo National Museum.

“The movements are not official,” said Kim Byung-yeon from the South Korean government’s Cultural Heritage Administration, referring to the North-South collaboration. The Korean government says it’s a very sensitive issue and would not comment.

The Japanese Embassy in Korea and the Imperial Household Agency also remain silent on the issue.

“It’s complicated, taking into account that Korea was once colonized by Japan,” said Lee Keun-gwan, an international law professor at Seoul National University. “The legal provisions are very vague.”

When Korea signed the Treaty of Basic Relations with Japan in 1965, claims for cultural properties were nullified. The treaty states, “all treaties or agreements concluded between the Empire of Japan and the Empire of Korea on or before August 22, 1910 are already null and void.”

Park Sang-kuk from the Korea Cultural Heritage Research Center is still cautious about civic groups’ emotional and subjective campaigns. He says irrational political campaigns could make it harder for Korea to bring back its lost treasures. Instead, he suggests “civic groups must be objective and reasonable” and that “Korea should create a sounder environment that is based on objectivity and reason.”