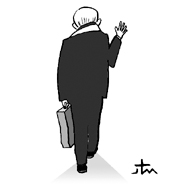 United States nuclear envoy Christopher R. Hill sat with three Chinese citizens in a quiet restaurant in the back alleys of Beijing. The conversation took place in June ahead of North Korea’s planned declaration of its nuclear program and demolition of a cooling tower at Yongbyon.

The three were North Korea specialists. One of them recalls Hill starting the discussion with an unexpected question: “Do you think North Korea really intends to give up its nuclear ambition?” The man has been the mastermind behind many breakthroughs in talks with North Korea and yet he remained doubtful on the most fundamental question.

When talks between North Korea and its five dialogue partners ended fruitless in December 2006 after Pyongyang tested a nuclear device, Hill sent a messenger to the North Korean Embassy in Beijing. He told North Korean diplomats to name the time and place, and he would be there to talk.

His dexterity and boldness brought North Korea and the U.S. together in Berlin the following month and eventually led to North Korea’s agreement in Feb. 13 to lay out concrete action plans to dismantle its nuclear facilities.

To Hill, Japan was no easy partner as Tokyo had opposed the U.S. plan of removing North Korea from the list of state sponsors of terrorism, because of the abduction of Japanese citizens decades ago. Hill is said to have carried around photos of abducted Japanese citizens to show them to his North Korean counterpart, Kim Gye-gwan, to resolve the problem.

But informally, he is known to have said the train has left the station, suggesting that the decision to remove North Korea from the terror list cannot be retracted due to North Korea’s failure to address the abduction issue. Among Japanese diplomats, he later earned the nickname “Kim Jong-Hill.”

Hill’s relations with officials in Seoul were amicable during the Roh Moo-hyun administration. But one of Hill’s aides say a shift in Seoul’s policy toward North Korea under the new administration gave the U.S. diplomat a headache. At last week’s six-party talks in Beijing, Hill failed to cajole North Korea to agree to specific steps to verify its nuclear activities. He expressed disappointment over North Korea’s refusal to put in writing what it has agreed to do verbally.

But he should be no stranger to such backtracking from the North Korean regime. The career diplomat’s role in the Obama administration is unknown, but we hope Hill walks away from his job with an answer to the question posed to the Chinese specialists. It’s something we all need to know.


The writer is deputy political news editor of the JoongAng Ilbo.