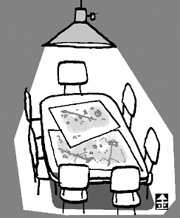 In London, England, between the prime minister’s residence and the Houses of Parliament lies a tourist attraction. This is the war room that Prime Minister Winston Churchill created in the early 1940s.

The small meeting room can be found at the end of a dark corridor lit only by candles. However it is the seating arrangement that attracts attention. The seat right next to Churchill, of the Conservative Party, was occupied by Labour Party leader Clement Attlee.

When the war broke out, Churchill employed Attlee, his biggest political rival, as deputy prime minister and home secretary. When they reached an agreement in a meeting, the agreement immediately became an operational order. This was more efficient than Hitler’s system. If the opposition party resisted, Attlee ran to Parliament to calm the opposition. Whenever there was a meeting, Churchill called in a worker from the statistics department who showed the reality of the situation. The news of Britain losing battles helped them unite. Churchill and Attlee succeeded in winning the people’s hearts.

The United States also has a war room. During the 1963 Cuban Missile Crisis, then- defense secretary Robert McNamara ignored the customary briefing by the chairman of the Joint Chiefs of Staff. He sat in the war room all day long and even directed locations for U.S. warships. In the last stages of the crisis, President John F. Kennedy directly called the captain of a destroyer facing a Soviet submarine and ordered it to refrain from firing. As a result, the Cuban crisis did not escalate into war. However, Kennedy wasn’t hands-on for every matter. During important meetings, he purposely left the war room quietly because he was concerned that the chiefs of staff would not be able to express their opinions freely in the president’s presence.

The Korean government plans to elevate the committee for macroeconomic policy to that of a war room. Heads of economic organizations will gather and decide measures to overcome the economic crisis. But compared with the war rooms of Churchill and Kennedy, something is missing.

In Korea, the president alone controls all affairs, no matter how busy he is. The chairman of the Grand National Party visited the presidential office recently and said, “Speed is of the utmost importance now.” His remark is not necessarily wrong but nonetheless it makes people uncomfortable. What’s most important is consensus. Like Churchill, President Lee should invite his rivals, Democratic Party Chairman Chung Sye-kyun or former GNP Chairwoman Park Geun-hye, to sit next to him.