Would sir prefer the cloned or regular beef?

Would sir prefer the cloned or regular beef? 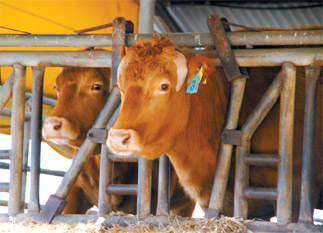 Cloned hanwoo pictured at the National Institute of Animal Science. Provided by the Institute

It could be only a matter of time before we start to see cloned hanwoo, Korean beef, on our dinner tables and in restaurants

In June, to the surprise of many, a “super hanwoo” weighing over one ton, was reported in the media. The cow had a superior growth rate and was well over the average hanwoo weight of 700 kilograms (1,543 pounds). Its owner, wanting to secure the superior gene of his prize herbivore, contacted the National Institute of Animal Science to discuss cloning. He’d tried to capture the gene himself but had failed.

With the latest turn of events, it’s only natural for the public to wonder about the safety of cloned meat and other related products.

According to Yang Byeong-chul, a veterinary doctor at the National Institute of Animal Science, it’s too early to give any definite statements about cloned products.

“Currently there are 14 cloned cattle in Korea. However, they are being monitored and reared for research purposes only,” said Yang.

The Korean government has yet to declare cloned meat safe for consumption and the debate is heating up. The U.S. Food and Drug Administration and European Food Safety Authority announced that cloned pork, goat meat and diary products were suitable for consumption.

In response, consumer protection and religious groups reacted angrily over what they perceived to be dubious results from short-term research.

Similarly, the National Institute of Animal Science, which sprung the first cloned hanwoo on the unsuspecting world in 1999 and have cloned 29 to date, conducted its own research into the safety of cloned beef and dairy products. The results of the research, which started in 2001 and took two years to complete, suggested that cloned meat and dairy products didn’t differ from regular beef products. Researchers also found that cloned and regular beef reacted in similar ways when they were put in cold storage before being shifted to supermarkets.