Visionary art for the visually impaired

Visionary art for the visually impaired

Students at Hanbit School for the Blind work with different materials during an art class designed specifically by professional artists who work with nonvisionary senses such as touch and sound. By Jeong Chi-ho

The afternoon school bell rings at Hanbit School for the Blind and Yu-jin rushes to her art class. She’s the first student to arrive. She gives each of the volunteer teaching assistants a hug and then one of them brings her a box of paint and a sketchpad. And so the class begins.

The volunteer dips a paintbrush into a paper cup filled with water and then places it in Yu-jin’s hand.

‘What color do you want?” the assistant asks the fourth grader, directing her hand and the brush to the palette of colors.

“Give me red,” Yu-jin asks the assistant teacher. “It’s the same color as my sweatshirt.”

Minutes later, Yu-jin is filling the page of the sketchpad with brush strokes reminiscent of Kandinsky’s bold musical artwork. The 12-year-old artist then chooses yellows and reds and creates a colorful assemblage in her distinctive rhythmic manner.

Art teachers at Hanbit remember their first perplexing encounter with Yu-jin, an epileptic and one of the school’s 145 visually impaired students. Using only a crayon, she reluctantly drew a tiny circle on the edge of her sketchpad and then sat through the rest of the class with her head downcast. In the first few weeks, the teachers noticed her distracted emotions. When Yu-jin first came to the school, she had been so severely abused at home that her elbow joint has been permanently damaged.

Another student, Park Hyuk, had faced similar challenges. Hyuk defected from North Korea with his mother and older sister two years ago, and until he started at Hanbit last year, he had never had any formal training in art. He had a hard time coping with day to day school life in Seoul at first. Back home, chopping down trees on a mountain with his older sister was all he did because there was no appropriate school for him.

During a recent art class, the 16-year-old boy built the kind of traditional clay kiln that had been replaced long ago with gas stoves in the South.

“I remember watching my mother cook with one of these ovens before we came to the South,” he explains with a sense of nostalgia.

Yu-jin and Hyuk, who can still make out light, are the two most outgoing students at Hanbit now, which many of the teachers attribute to the school’s unique art classes.

“I see these kids getting married and having children after they graduate,” says Kim Kang-ja, who has been teaching at the school since 1974, four years after Hanbit was founded. “I have seen them go through some amazing transformations after studying art with us.” 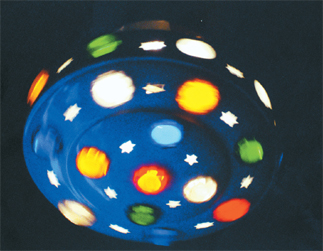 A photograph of a disco-ball at a karaoke room taken by visually impaired student Kang Geum-yeong. Provided by the gallery

The art classes for the blind at Hanbit went through a radical overhaul in 2000 when local artists devised a program for students who are blind or partially sighted.

Instead of teaching blind students to mimic representational art as taught in the school curriculum for sighted students, the artists pushed the visually impaired students to explore their disability and develop a set of images of what they cannot see.

The idea opened up a whole new channel of art and encouraged the students and observers to use non-visionary senses such as touch, sound and emotion to produce and appreciate art.

For the artists, the project was a choice between reassurance and a test of whether art can really transcend what we see.

Some of the work produced in these classes was exhibited at a new gallery called Another Way of Seeing, (02) 733-1996, that opened last month in Samcheong-dong, northern Seoul.

The gallery’s opening also marked the 10th anniversary of the Korean Association for Blind Artists, a nonprofit organization that has set up art education programs and established international networks. Their work for the blind has also given sighted people a new perspective on art. Earlier this year, the association published “To the Hand and Body,” a children’s illustrated book for people with or without sight that explores non-visionary senses.

The current exhibition at the gallery, which runs through Dec. 20, features the work of visually impaired students from Korea and Japan, including sculptures that use tactile materials such as wool and clay. There’s even a selection of photographs by students who can sense light such as a close-up of a shaved head and light beams leaking through the leaves of a summer tree.

“It’s interesting how some of the best work in the show often comes from children who were born blind,” says Koh Joo-kyoung, an instructor at the Seoul National School for the Blind. “They have such confidence in themselves while students who lost their sight later heavily depend on their memory of vision.”

Teachers and assistants play a vital role as facilitators in the workshops with students. They help the artists choose the colors they want to use and they describe the scenery and camera angles the students face in photography classes.

There are 12 schools for the visually impaired in Korea but only three - Hanbit, Seoul National School for the Blind and Chungju Sung-mo School - have developed art programs. 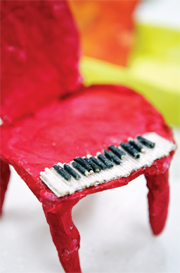 A student’s work done in paper-mache at Hanbit.

But in the professional field, art created by the blind is even rarer.

Only about 1,600 Koreans living with disabilities work in the creative sectors, according to the Korea Employment Promotion Agency for the Disabled, a local watchdog.

Fewer than 8 percent are visually impaired.

Traditionally, career options for the blind were limited to massage and acupuncture and while this is still the case, more schools for the blind are looking into more creative jobs like music, entertainment and art.

Related industries have only recently started to look to the visually impaired. Earlier this year, a blind student was admitted for the first time to the graduate school of a fine arts department at Hongik University, the nation’s most prestigious art school.

“I think it’s a common misconception that our senses function separately,” says Kang Sin-ja, another artist who teaches at Hanbit.

“But as an artist, I know through experience that our senses are not divided. It’s a union, and it functions more organically than we assume. The students’ work is a testimony to this.”