[BOOKS in brief]Shed the armor and just be yourself

[BOOKS in brief]Shed the armor and just be yourself 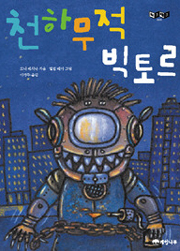 The fairy tale “Victor l’Invincible” by Denis Vezina is especially written for shy kids. It’s not one of those stories where a cowardly protagonist suddenly becomes a brave, heroic figure. Instead, the book tries to give comfort to timid children, telling them it’s okay to be scared.

For Victor, the main character, the world is full of fears — the monster in his closet, the big spider in the basement and even long tunnels and high bridges. And what terrifies him most is public speaking.

When he was 9, Victor froze up during a class presentation, blushing furiously and eventually wetting his pants. Everyone laughed at him and Victor has been a loner since. As he’s scared to do anything, he makes silly mistakes.

Victor needs a solution. He makes himself a suit of armor equipped with a electronic gun, a knife and a welder. In his impenetrable armor, there is nothing that Victor fears. He also wears a mask, which hides his shyness and blushing. As no one can see his face, he sails through his presentation without a hitch.
Victor want to live forever wearing his super armor. But he encounters a problem. He can’t grow while he’s wearing the armor. So he finally decides to take his armor off and go back to the “shy” Victor.

Like before, the smallest thing makes him turn bright red and he’s scared of everything. But even in such situations, he grows continuously. Victor finally realizes that growing up and maturing is a precious gift that should give everyone hope.

This book should be read by parents who try to protect their children with “armor.” They need to realize that children need to shed the armor in order to grow up and mature into sound individuals. By Lee Ji-young