Six steps to the end of the world

Six steps to the end of the world 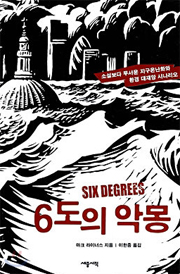 Six Degrees: Our Future on a Hotter Planet

We’re having a warm winter this year. You might be relieved that the weather is not as cold as in previous years but you might not realize just how serious global warming is.

The Intergovernmental Panel on Climate Change under the United Nations released a report in 2007 that said average global surface temperatures could rise between 1.1 to 6.4 degrees Fahrenheit by 2100. Six degrees? You might wonder if that’s such a big deal. It’s smaller than the range of the highs and lows of a typical day at this time of year.

There is an enormous amout of research information referenced in Lynas’ book indicating what kind of impact global warming could have on the planet, from Tanzania’s corn harvest to snowfall in the Alps. The author’s sense of urgency and his shock at the way research results are quickly forgotten, or ignored, underscores the tale.

While contemplating how to let the whole world know about this, he came up with the degree by degree guide to the globe’s future.

If the globe’s average temperature rises by one degree, disaster begins on the mountains and fields. The soil under arable land will be exposed due to drought and there will be landslides following the polar icecap melt.

Two more degrees higher will result in more disastrous droughts and floods all over the world, since it takes longer for the summer monsoons to dissipate. Also, as carbon dioxide, one of the main causes of global warming, is absorbed into the ocean, the water turns acidic.

An increase of three degrees will cause desertification even in the wet Amazon regions and a four-degree rise will unlock the waters in the glaciers. After a five-degree hike, the world will be almost unrecognizable, an inhospitable land for humans.

Even the glaciers of the North Pole will melt away and as people crowd into habitable areas, war will break out as people fight for space. With a six-degree increase, most life on Earth will become extinct.

The author emphasizes that we should not let the average temperature of the globe rise more than three degrees. Anything more than that will send the Earth into a vicious cycle of self-sustaining environmental destruction. As the soil in the tropical rainforests warms up, bacteria from dead plants will be released, which will lead to greater amounts of CO2 in the atmosphere.

Siberia’s permafrost will melt, which will lead to increased carbon and methane emissions.

Consequently, methane hydrate discharge from the warm ocean will worsen and the world will be confronted by catastrophe.

Models show that this disastrous scenario will unravel uniformly, but the solutions don’t seem clear.

As an alternative to the cap and trade system, which makes it possible for developed nations to buy CO2 emission rights from developing nations, the author points out that developed countries discharge far more CO2 than developing nations. He also warns that if we neglect environmental problems because of the global economic crisis, we will witness a worst-case scenario.

In other words, if it is not environmentally sustainable, we cannot expect the long-term survival of the economy.

Published last year in English and recently translated into Korean, this is a shocking and profoundly moving read, one that outlines the future of our planet in the harsh light of cold, scientific facts.

If global warming skeptics still exist, this book should be stuffed in their Christmas stockings as reading material for the New Year.

Six Degrees: Our Future on a Hotter Planet