A scene from the hit musical “Dae Jang-geum [A Jewel in the Palace].”

Ten experts, including music critic Wohn Jong-won and columnist Choi Seung-yeon, share some notable stories from 2008 as they explore the challenges that face the industry as it continues to develop.

A rare jewel in the court

The hit musical “Dae Jang-geum [A Jewel in the Palace],” is a unique musical theater enterprise.


When it was staged at Gyeonghui Palace in central Seoul this year, audiences were surprised by the unconventional modern setting.

While the story revolves around an historic palace from the Joseon Dynasty, the musical incorporates hip hop, fast tempos and a dynamic staging. The actors even broke into rap, creating an intense show. 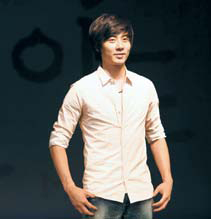 It was an adventure for the production company to pursue such a different staging.

The Jewel in the Palace has sparked what might just be a mini revolution in theater here. At least, it has demonstrated the possibilities of what can be achieved with imagination and guts.


Snapshot of a surprising cast

The career of Andy from the boy band Shinhwa seemed to have reached a high point when he starred in MBC TV’s reality show “We Got Married.”

So fans might well have been bemused when the teen idol signed up for a supporting role in “Polaroid” in July.

Although critics panned the musical, Andy’s performance was just about enough to charm otherwise disappointed audiences.

Andy wasn’t the only pop star to tread the boards. This year, many celebrities appeared on the musical scene.

Who will be the next celebrity to become a musical star?


“Fiddler on the Roof,” a rare press conference

It was around 5 p.m. on the last day of October when the two main characters from “Fiddler on the Roof” showed up at a press conference dressed for a wedding.

What surprised many journalists and critics was that the wedding wasn’t simply a promotion for the show or a preview of one of the scenes. It was for real.

The two main actors - both in their 30s - were a real-life bride and groom. Since both had lost their fathers, Noh Joo-hyun and Kim Jin-tae “acted” as the fathers-in-law-to-be.

The ceremony was led by musical actor Shin Sung-rok and 40 members of the cast who crowded into the press conference, which was decorated like a wedding chapel.

When the assembled singers broke into “Sunrise Sunset,” a song from the musical, the bride and groom let the tears flow.

Of course, the wedding was perfect marketing for the show, a bit of a gimmick but an original way of promoting the musical.

The 1970s film “Really Really Like You,” starring Lee Deok-hwa and Lim Ye-jin, was a huge hit, but few would have ever imagined that a musical version would receive so much attention from fans today.

The musical brought the old songs back to life on stage and the predictable plot charmed the largely middle-aged audiences who flocked to the theater. 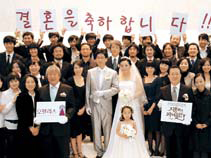 “Fiddler on the Roof”

After a successful first staging in June, the show was revived in August, notching up 100 performances and a profit of 200 million won ($155,600). 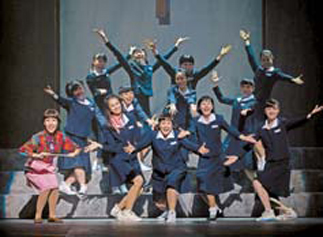 The show is going to be staged once more at the National Theatre of Korea and Hoam Art Hall, both in central Seoul, early next year.

The hit proved that musicals not only target the younger generation of musical fans in their 20s and 30s, but also people in their 40s and 50s.

Pooch performers rarely get a chance to show off their acting chops. 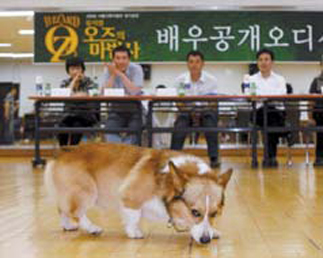 So auditions at the Seoul Metropolitan Musical Theatre on Sept. 18 for the “Wizard of Oz” fast became talk of the canine town.

After a rigorous test for stage presence and behavior, two mutts were selected from the 38 hopefuls. They were following in the paw steps of one of the most famous dogs in movie history, Terry, who played Toto in the classic Judy Garland movie.

The show is still on, running at the Sejong Center for the Performing Arts until Dec. 28.

SM Entertainment, one of Korea’s successful entertainment companies, came up with its own musical production, “Xanadu,” which died a death.

Kang In and Hee-cheol from boy band Super Junior took the main roles in the show that was a big hit on Broadway but failed to draw in punters here, despite the all-star cast and the innovative use of roller blades.

On weekdays, seats were less than half full and even though tickets cost 99,000 won at the box office, the company couldn’t recoup its 1.7 billion won investment.