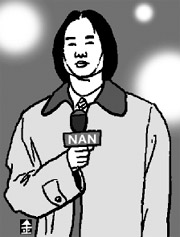 “Do the show!” from a telecommunication company’s ad was the phrase on everybody’s lips in 2007. It meant that we all enjoy our lives, that everything’s positive. The model who belted out the catchphrase at the end of the ad shot to fame.

There were many buzz phrases in 2006. Comedian Kim Mi-ryeo’s Madam Gag, who made cynical remarks about the hypocrisy of the upper classes, became the craze of the year, to the extent that movie star Lee Young-ae parodied it in an ad.

Kim Hye-soo, who portrayed a sexy gambling hostess in the 2006 movie “The War of Flower” shouted “I am a graduate of Ewha University” at the police. This seemed to be the top phrase of 2006. Han Ye-seul, who played a spoiled heiress in the drama “Fantastic Couple,” comedian Shin Bong-seon, and the historical drama “Jumong” all popularized sarcastic words and phrases.

We got a mingled idea of cynicism and philosophical maturity in 2005. In the film “Lady Vengeance,” Lee Young-ae’s line “Do your business” smacked of sarcasm, while gagman Jang Dong-min focused on the importance of viewing human affairs with a philosophical eye. A credit card ad encouraged people to consume much more, saying, “My father said that we should enjoy our lives.”

However, the strongest was “I only did” by gagman Ahn Sang-tae. The reporter played by Ahn wears an ill-fitting coat and a miserable expression. He makes people laugh by messing up already bad situations. He has no way of overcoming the painful situations except by saying “I only did.”

Some time ago, the optimistic song “Everything will be realized as we think” swept the country. As I recall those days, it seems as if we were separated by an age.

These days, the following buzzwords have been overheard daily: “Myeongtoi,” which means voluntary retirement; “Saojeong,” for people who retire at the age of 45; and “Leetaebaek,” for the unemployed in their 20s.

These words poured in during the 1997 financial crisis. As soon as we got out of that dark tunnel, card companies extolled the accomplishments of wealth and consumption, saying, “Become rich,” and “You worked hard. Leave!”

More than 10 years have passed since that crisis. The public sees itself in the pitiful reporter Ahn Sang-tae.

So what will the next buzz phrase be?


The writer is a deputy culture and sports editor with the JoongAng Ilbo.