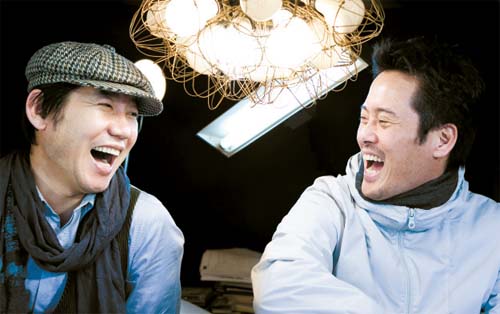 Park Sang-won, left, and Nam Gyeong-ju hope to redefine Korean theater by focusing less on the commercial aspects and getting back to basics.[JoongAng Ilbo]


In a small office in Nonhyeon, southern Seoul, two major actors were wrangling with each other over a script.

“Gyeong-ju, I think there are too many lines here. Why don’t we replace some of them with movement?” said Park Sang-won, 49.

“No, no. I think those lines are necessary,” replied Nam Gyeong-ju, 44, who’s known Park for more than 20 years.

The two thespians, who recently launched Park N Nam Productions, were discussing the show “All That Musical,” in which Park directs Nam in the main role.

They decided to embark on this special journey in the spring of last year, but so far they have taken things slowly. The fast lane is the last lane they want to be heading down.

“The world today is changing at the speed of light. But we would like to take things slow. Instead of mass-manufacturing performances, we would like to show the artisan spirit and take time to handcraft one show after another,” Park said.

Nam agreed. “For the last 20 years, we hungrily pursued our dreams. Today we are pretty much settled. So from now on, we would like to do what we’ve always wanted to do. And we’re not taking any shortcuts.”

This means streamlining the system in the performing arts industry, giving backstage staff the recognition and treatment they deserve and strengthening safety on stage.

But what worries the two veteran actors in particular is the overly emphasized commercial aspect in the industry.

“There are so many performances that are just about profit-making. And as a result, their production process is too commercial,” Nam said.

“But we plan to produce shows like in the good, old days, without compromising a production process we prefer, which is focusing on each performance regardless of whether it will make money or not.”

As its first step, Park N Nam Productions put on “Nam Gyeong-ju - All That Musical” in the summer of 2007.

The show, which presents highlights from famous musicals, has toured the country dozens of times since then.

The performance gets a makeover this Christmas.

It’s going to be called “A Very Special Christmas with Nam Gyeong-ju” and started a four-day run yesterday at Goyang Eoulim Nuri Theater in Goyang, Gyeonggi.

Hoping to reach out to the less privileged during the holiday season, the production team gave free seats to physically disabled people, children with separated parents and senior citizens living on their own.

Another special invitation went to the players of “Happy Musical,” a theatrical company that consists of children from low-income families with dreams of a career in acting.

The cast in “Happy Musical” got speaking roles in the second act of the show with lines written by Nam.

“I’d be lying if I say I wasn’t worried. But as time went by, the kids improved so much. It was a great learning experience for me, too. Looking at these kids and their passion, it takes me go back to the beginning of my career. They make mistakes, of course, but the most important thing is whether their hearts are in it or not,” Nam said.

Meanwhile Park recently held his first photography exhibition, an experience that taught him a great deal, he said.

“I showcased a total of 45 photos. The moments captured in them don’t even add up to one second and it occurred to me how many great moments I must have missed as I pursued worthless things in my life. I want to spend every moment of my life in more meaningful ways,” he said.

In line with such a determination, Park plans to donate all of his earnings from the exhibition to help others in need.