Lee’s battle with the BIS

Lee’s battle with the BIS 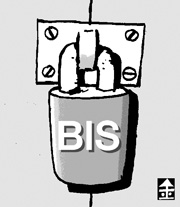 Basel lies in Switzerland, bordering both Germany and France. On the first Sunday of every month, a secret meeting is held in the city. The meeting is attended by finance ministers and governors of central banks in the G-10 countries. Behind a locked steel door, they discuss sensitive, international financial issues. That is why the Bank for International Settlements was dubbed the “Kremlin” of the financial sector.

Economist John Maynard Keynes was originally critical about the financial sector’s excessive engagement with outside forces. He believed financial systems must stay within their respective countries. However, he faced a problem after the issue of Germany’s war indemnity emerged following World War I. But in 1930, he changed his line and said an ultranational financial institute was needed to serve as a midwife for the BIS. As the indemnity issue ended in smoke, the BIS was on the verge of closing down. It stayed afloat thanks only to its geographical proximity and its role as guesthouse for the G-10.

The BIS, however, reappeared in the front line in the 1980s, when the Continental Illinois National Bank and Trust Company, at that time the seventh-largest bank in the U.S., went bankrupt when it couldn’t recover loans from Mexico. Shortly before that, German bank Bankhaus Herstatt also closed down. As a result, the BIS capital adequacy ratio was devised.

The BIS ratio has since become a yardstick to decide the fate of banks. From this year, the standard has become even more important as the second of the Basel Accords was introduced in order to assess banks’ risks differently according to debtors’ credits.

The domestic banks are desperate these days to meet the BIS capital adequacy ratio. They have no choice if they want to stay open. But it isn’t easy to increase capital amid the financial crisis. If they try to take money back from companies that are defaulting, governments aren’t happy. Basel II makes it impossible to take away umbrellas from companies when it rains.

The G-10 meeting seems to prioritize the security in the financial system over the BIS ratio. The U.S. and the U.K. poured public capital into their large-scale banks even before the BIS capital adequacy ratio was confirmed. The BIS ratio should be increased but nonetheless, the economy must not be suffocated.

President Lee Myung-bak said the current BIS ratio, which forces banks to reduce their lending during an economic slowdown, must be changed. His remark is right by any standards.