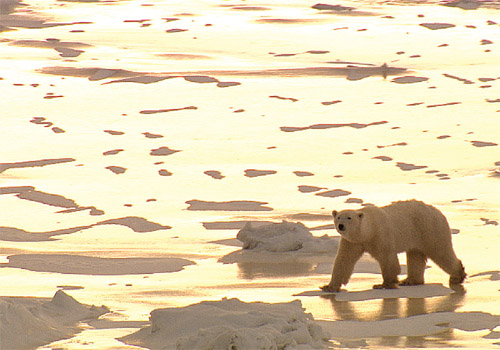 The ice is melting. Polar bears have been driven from their habitats. And Inuits living in Qaanaaq, the northernmost community in Greenland, are finding it difficult to hunt.

If there are any doubters still left on the planet, they should have watched MBC TV’s recent documentary about the impact of global warming for people living among the Arctic ice.

Around Qaanaaq, 840 miles (1,351 kilometers) away from the North Pole, the hunting season for many wildlife animals that follow the sea route and approach ice should be in full swing.

But climate change has made it difficult for the Inuits to predict when the ice is going to melt, which makes harpooning narwhals challenging.

The narwhal, also known as the Polar Whale, swims to the surface of the sea between ice floes to breathe. But now that so much of the ice has melted, the whales have more options for breathing holes, so the Inuits are less certain where to wait with harpoon at the ready.

These stories came to life in “Tears of the Arctic,” a MBC TV documentary that examined the impact of global warming on this northern community.

The last of the three-episode series aired last Sunday and, according to TNS Media, it attracted 11.3 percent of viewers watching television.

This Sunday MBC TV unveils the making of the documentary, a behind-the-scenes look at the incredible photography narrated by the actor Ahn Sung-ki.

“Research shows that the Earth’s average temperature has risen by up to 0.7 degrees Celsius,” said Yoon Mi-hyun, the show’s executive producer.

“The documentary doesn’t directly criticize global warming, instead it tells the story of climate change through the lives of wild animals and the people who live in the region,” said producer Heo Tae-jung at a production conference in Yeouido, northern Seoul, early this month.

The documentary team was determined to film in as much detail as possible. Some of the most impressive scenes were the shots of polar bears taken from just 10 meters away.

Many of the most spectacular scenes were possible because of an innovative camera called Cineplex. The telephoto lens, which cost 100 million won ($76,500) to rent for one week’s shoot, allowed the team to pick out thousands of reindeers with a single shot.

Though expensive, “the new equipment was worth it,” Yoon said.

For most of the crew, it was one of the most dangerous projects they had experienced in television. One member of the team nearly drowned in the freezing ocean when taking shots of wildlife.

The producers built a camp near the Lancaster Sound, a strait lying between Devon and Baffin Islands in Canada, and shot around 270 hours of tape.

While the first episode focused on the Inuits, the second and third looked at wild-life, including the endangered polar bear and reindeer.

According to the program, rising temperatures mean polar bears find it increasingly hard to survive. The melting ice is reducing the territory that they call home, where they hunt and mate.

“The melting ice is a warning from nature,” Heo said.

Tears of the Arctic is one of several documentaries on terrestrial channels that rose to attention recently.

The program, which was narrated by actor Choi Yeung-han, followed ancient trade routes that stretched from Nepal, the Himalayas and Tibet into India.

This year, KBS TV’s “Noodle Road” tracked down the 8,000-year history of noodles.

Last month, MBC TV presented “Spice Route,” a documentary that looked at how spices from Asia wound up in the kitchens of Europe.

Discussions are currently under way for screening the series in theaters sometime next year.

Explore your dreams while still awake at 'Dreamer, 3:45am'