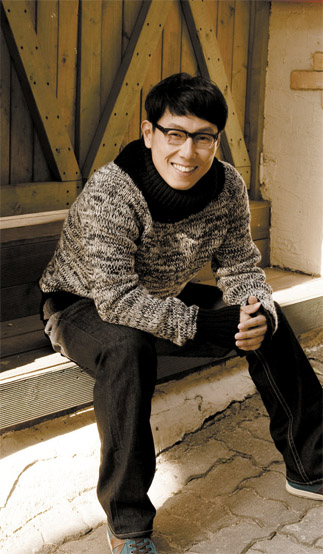 Singer Yoon Jong-shin is back after a four-year hiatus. Provided by Music Dopio

Singer/songwriter Yoon Jong-shin, 39, is back.

Though he’s continued to be in the public eye through his work as a TV talk show host, actor, entertainer and radio D.J., it’s been four years since he released his last album, “Behind the Smile.”

This time Yoon is back as a singer with his 11th album, “Around the Neighbor.”

He confesses that he “really wanted to sing” and “deliver his own emotions through his voice.

In fact, ever since the singer debuted in 1990 as a member of 015B and as a solo act in 1991, Yoon has been known for his expressive lyrics and catchy melodies.

How does it feel to be back on the music scene?

“Many people have been telling me that I changed my image into an entertainer and comedian. But that’s wrong,” Yoon said.

“It’s just that they’ve discovered my brighter side.”

It is true he wanted to catch two rabbits at the same time, performing as a pop balladeer and as an entertainer.

With a lighter image now, Yoon said he was tempted to sing more poppy songs instead of ballads for his latest album.

Commercial songs would earn him more money. But he’s decided to stick to what he knows best: ballads. They are more meaningful, he says.

Yoon does have at least one upbeat song, “Impromptu Trip,” on the album. It’s a cheerful track that Yoon hopes will help boost the country in these harsh economic times.

“I recorded the song to comfort friends who lost money investing in funds,” Yoon said.

The lyrics try to persuade people to forget about this crowded, suffocating society for a moment and instead join the singer on a journey. Yoon hopes that listening to the song will help fans recapture some hope.

The songs “Around the Neighbor” and “Night View” are meant to console a broken-hearted man who is going through the gloomiest period of his life.

“Oh! My Baby,” on the other hand, has a much brighter atmosphere.

When he was writing the song, he thought of his wife and son, a family he never imagined when he was single.

“When I came across artists who wrote songs and dedicated them to their children, I promised myself I wouldn’t do that,” Yoon said.

“But as a father now, expressing these emotions in songs is inevitable.”

His recent album is a collaboration with longtime friend Jung Seok-won, still a band member of 015B. The two founded a production company called Team Dopio.

“Jung’s music is somewhat elaborate and trendy, whereas mine is slower and more classic and traditional,” Yoon said. “The synergy works perfectly when our music is combined.”

In order to bring out the sensitivity from his younger days, Yoon randomly visits friends’ house to produce the songs, a process that he says makes it easier for him to express his feelings.