Snowfalls of the heart

Snowfalls of the heart 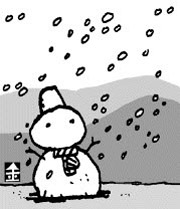 Lee Si-young’s poem “Snow is Falling” leaves indelible images of memories in the hearts of people ? even those living in big cities.

Snow beckons us to recall our memories of the peacefulness of snow-covered hills, fields and towns, those nervous feelings we felt as teenagers or the innocent feelings that purified our souls. It gives hope to those in poverty, and consolation to those frustrated about the injustice of our times. Through poems we can wade deep into the snow-covered landscape inside our own minds.

For the poet Kim Jeong-ran, snow means where soul was born. In her poem “Snow” she writes, “Snow is falling/ We hear our souls/ run barefoot/ When the world was created, when we were still dreams/ when we were the wings for a larva, sprouts for spring/ breaths of a god/ Then, we whispered under our breath.”

Hwang Tong-gyu would whisper a prayer at night when there was a snowstorm. The prayer is a gesture of a person who is leaving you but who is still longing to communicate with you. His poem “Prayer” reads, “Walking on a street where there are few people and everyone yells at each other, I was wearing a smile like a woman in despair or like a snowstorm.” Another line goes, “If you show me a riverside where the wind is blowing I will willingly show you how reeds fall.”

Kang Woo-sik wrote a collection of poems about snow and in the book he recalled a woman he loved. “The one I love, at nightfall when it snowed/ I wanted to gather an armful of dried pine tree twigs/ and heat the room you stayed in/ until silent snowflakes stopped falling.”

Poets find not only nostalgia in snow. For Jong Ho-seung, snow brought consolation because it covered the entire world with one color.

In his poem “My Father,” he writes, “Whenever it snowed, my father/ was happy because he had nothing./ He had lost everything to debtors and left his hometown,/ he took along his family but didn’t have even spoons,/ looked at his wound that the person he had trusted had left,/ and lived life without his own place./ Whenever it snowed, without exception/ he was happy because he had nothing.”

Snow is Falling describes the agony and injustice of our times: “In a land where nobody lives/ snow is falling./A word unknown swear/trembles in fear and disappears.”

The next time snow begins to fall, what will we think of? Will we worry about traffic jams or search out our own snow-covered landscapes hidden deep inside our hearts?