A screwball look at the early NFL

A screwball look at the early NFL 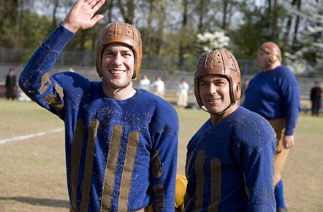 
Screwball comedies might be out of fashion these days, but George Clooney as director and lead actor has gone against the grain in “Leatherheads,” a throwback to the era when this kind of fast-paced farce was all the rage.

Set in the 1920s during the early days of professional American football, Leatherheads is essentially a sports-themed romantic comedy about Dodge Connelly (George Clooney), a middle-aged quarterback who recruits star player Carter Rutherford (John Krasinski) to join the team. But off the field, relations are strained by a love triangle featuring silver-tongued journalist Lexie Littleton (Renee Zellweger).

At first sight, Leatherheads seems to be about two sporting rivals, but it is certainly not just a football movie. It is more like a classy romantic comedy, providing lots of smiles, if not laugh-out-loud moments.

Carter is a genuine “star signing” and soon becomes a celebrity, smiling for the cameras and shooting toothpaste commercials.

After Carter signs for the Bulldogs, the sport’s popularity surges and the ball game becomes more of a business.

The inquisitive journalist Lexie, doubtful of Carter’s wartime heroics, tries to uncover a scoop but ends up becoming romantically involved with the star. Meanwhile, Lexie and Dodge quarrel like high-strung cats and irritated dogs, despite their obvious chemistry. The dialogue is packed with wit and delivered like a quick-firing gun, sending audiences back to the black-and-white heyday of sharply scripted movies where the interplay between the macho hero and a blonde beauty crackled.

However, there is little tension between the three characters, although Lexie is caught between Dodge and Carter.

Behind the football heroics and humor lies some weighty issues, too. Clooney seems to be saying that money deprived football of its real fun and Dodge sees Carter as a victim of the public’s fanaticism.

The media needed a hero so they created him. Fans already know he isn’t the hero, but prefer to ignore reality.

If Leatherheads seems old-fashioned, that’s the intention. Clooney must have known the style would go against the tide and wouldn’t make much money. He didn’t want to make another blockbuster, but a vintage screwball movie, and he did.