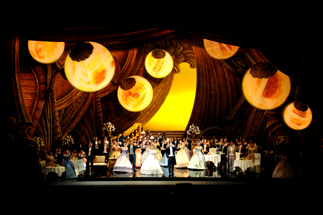 It seems the reviews lived up to the hype. There were 10 curtain calls plus a five-minute standing ovation.

“We were about to leave thinking that the round of applause would die down soon, but the theater manager came to us and asked us to make another appearance,” said Park Se-won, director of Seoul Metropolitan Opera, after the troupe’s recent performance of Giuseppe Verdi’s “La Traviata” in Italy on Dec. 19 and 20.

The occasion marked the first time that an all-Korean version of the opera produced in Korea had toured overseas.

The show was sold out both nights, only the second time a show has been fully booked at the Teatro Lirico Giuseppe Verdi in Trieste, Italy.

“Some of the Korean residents in Italy who came to buy the tickets on the day of the performance had to return home because it was sold out. I think the fact that an Asian troupe was presenting its own version of a major Italian opera in Italy got people talking,” Park said.

Park has tried to stay as loyal as possible to the original work. Giorgio Zanfagnin, director at the Italian opera theater, said the classical interpretation had triggered the explosive reception.

For the last decade or so, modern interpretations of the opera have been more the fad.

Directors transported the opera, which was written in the mid-19th century into a 21st-century setting, switching the nobility and their retainers into pop and sports stars, for instance.

Against this backdrop, the Seoul Metropolitan Opera’s classical version was a lot more traditional.

The Seoul Metropolitan Opera has been presenting Verdi’s works since last year, working hard to get audience feedback after performances through surveys to find out what patrons really want from opera today.

“We will continue to research and reflect the voices of the audiences at home and abroad. And we hope to export more of our pieces abroad,” a spokesman for the opera group said.