Pop idols dominate the charts in 2008

Pop idols dominate the charts in 2008 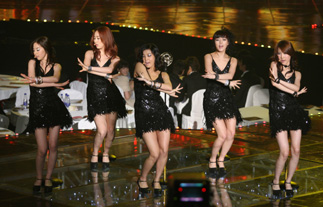 Wonder Girls were among the biggest artists of the year.[JoongAng Ilbo]

In the Korean pop scene, 2008 was a banner year for popular boy and girl bands like Big Bang and Wonder Girls.

Big Bang, a five-member boy band, enjoyed that honor last year. Their song “Last Goodbye” stayed at the top spot for six straight weeks and “Lie” held the place for five weeks in 2007.

In another indication of their popularity this year, Big Bang and Wonder Girls were picked as the people’s favorite artists in a recent survey by Gallup Korea. 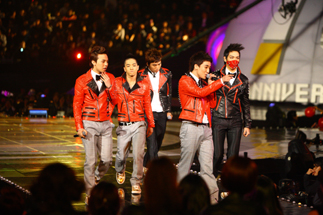 Dong Bang Shin Gi, a boy band also known as TVXQ, also enjoyed their share of popularity this year, making a high-profile comeback in October. Although their title song “Mirotic” was rated “harmful for teenagers” by the Commission on Youth Protection, their third album sold more than 460,000 copies. With the record, TVXQ won the Grand Award at Korea’s Golden Disk Awards earlier this month.

These made-to-order pop groups differ from those in the 1990s in that they’re popular among a wide range of age groups, not just people in their teens.

Today’s pop idol groups present songs with melodies and lyrics that can easily be sung and memorized. Plus, many of them go for retro styles that older generations can relate to. This is why they enjoy a nationwide fan base.

This year’s Korean pop scene also ramped up the hooks to grab listeners’ attention. Chart-toppers heavily featured catchy, repeated melodies and lyrics that made the tracks play over and over in your head all day long, whether you wanted them to or not.

Lyrics like “I want nobody nobody, but you” in Wonder Girls’ “Nobody,” “I’m crazy, so crazy” in Sohn Dam-bi’s “Crazy,” and “Baby, one more time,” in Jewelry’s “One More Time” have catapulted these songs to become big crowd-pleasers at company parties, talent shows and karaoke bars.

Experts say the overwhelming prevalence of these addictive little ditties can be attributed to the digitalization of the music industry. Compared to the past, when we were limited to hard copies like CDs or cassettes, there so are many ways to tune in these days - such as via MP3s, ringtones or a little thing known as the Internet. This means songs have to fight to get noticed.

“More and more people listen to music casually, without much thought. Thus, music producers have to come up with something hotter and catchier to get attention and trigger interest,” said Lim Jin-mo, a pop music critic.

One composer who declined to be named said producers are often asked to come up with addictive hooks.

“Instead of looking at the overall structure and flow, people tend to look for that one catchy line or melody.”

While some experts are concerned about a decline in the overall quality of Korean music, others say this should just be thought of as a trend.

“After all, addictiveness is what we want from all music,” said music critic Park Eun-seok.