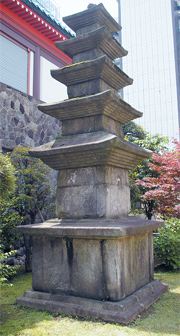 The five-story pagoda of Ichon. The base is not considered a story. Provided by the Ichon Cultural Center

The five-story stone pagoda of Ichon sits in a garden behind the Okura Sukokan Musem of Fine Arts in Tokyo, Japan. Owned by Tokyo’s Hotel Okura, the pagoda was taken from Korea over 90 years ago.

Some Koreans want it back.

Measuring close to six meters tall, the pagoda is a Buddhist design from Ichon, Gyeonggi that dates to the late Goryeo period (918-1392). It was shipped out of Korea for the personal collection of Kihachiro Okura, a Japanese merchant, in 1918.

Twenty-four civic groups from Ichon have formed a committee in August to try to bring it home.

In September, several committee members, including Lee In-su of Ichon Cultural Center and Prof. Kim Jeong-dong of Mokwon University in Daejeon, visited the director of the Okura Cultural Foundation, which manages the museum. 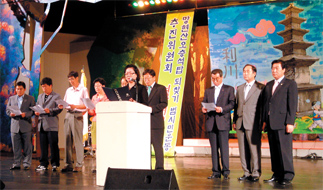 Leaders of various civic groups gather on Aug. 16 to announce the formation of the new Five Story Pagoda of Ichon Recovery Committee. Provided by the committee.

“We formally requested the return of the pagoda. However, the director refused. The pagoda has been designated an important art object by the Japanese government since 1950 and the decision is not merely up to the hotel,” said Lee.

Lee said the reaction was not totally unexpected and that he and others agree that a lengthy effort involving continual meetings between Korean and Japanese parties is important in order to bring about the pagoda’s return.

According to Kim, the trip was an important first step in laying the foundation for future correspondence between the civic groups and the Okura foundation. He said he merely joined the trip to help create a positive atmosphere.

In 1997, Kim played an instrumental role in securing the return of another cultural property, the Jaseondang [the sleeping quarters of the king in waiting and his wife] of Gyeongbok Palace. He says he stumbled upon the Ichon pagoda in 1995 while researching the Jaseondang. 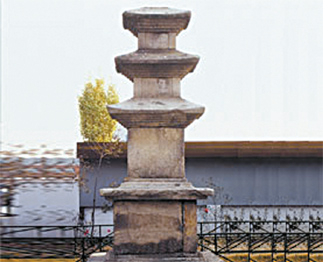 The three-story pagoda of Ichon currently located on the grounds of Ichon Yangjung Girls’ High School. Provided by Ichon City.

“The director of the cultural foundation we met does not have the final authority to make the final decision on such an important matter. There are complicated steps within the foundation that have to take place in order for the recovery of the pagoda to pan out. The Korean people might want an immediate return of the pagoda and some have criticized our trip, saying it didn’t bear fruit, but I don’t see it that way,” said Kim.

“The people of the Hotel Okura and the cultural foundation know of the pagoda’s history and significance, and while the pagoda does not belong there, it is as of now property of the hotel. Hence, it doesn’t help the cause to try to force the issue. If, for example, someone came into your house one day and angrily demanded the return of several books taken from him many years before, you might not respond in a positive way,” said Kim.

The Ichon pagoda is just one of thousands of Korean cultural objects in Japan. The pagoda was taken without proper agreement or acknowledgement from the city of Ichon and its citizens, many say. It and the twin three-story pagoda once sat atop a small hill on the northwest grounds of the Confucian Temple and school.

The long, winding road of the pagoda’s trip to the grounds of the Hotel Okura began five years after Japan began its colonial rule of Korea in 1910.

According to a research paper on Korean pagodas written by Kim Hui-kyung in 1965, an exhibition to celebrate Japan’s half-decade of rule was held from Sept. 11 to Oct. 13 in 1915 at Gyeongbok Palace. It attracted over 1.16 million Korean visitors.

Pagodas and other cultural relics from various regions, including the five-story pagoda, were transported to the palace to stock the exhibition.

“The exhibition was basically a way for the colonial government to display its authority and political achievements,” said Lee. 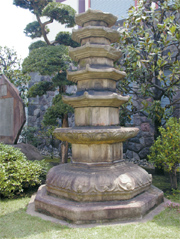 The five-story pagoda from Pyeongyang, currently under the possession of the Okura Shukokan Museum of Fine Arts. Provided by the recovery committee

The next step in the pagoda’s trip involved Kihachiro Okura, the merchant who eventually made his fortune in Korea. Okura was the founder of Okura zaibatsu, an organization similar to a jaebeol in Korea.

Okura was an avid collector of Korean relics, which he shipped off to Japan. In preparation for the 1915 national exhibition, several structures in Gyeongbok Palace were destroyed or removed. Okura had the Jaseondang, including its the supporting stone foundations, relocated to Japan.

His next ambition was to get a pagoda. According to Lee, Okura sent a letter to the Japanese governor general of Korea, Yoshimichi Hasegawa (1916-1919), requesting a pagoda be placed in front of his recently acquired Jaseondang. Okura initially asked for the seven-story pagoda in front of Pyeongyang Station. But because that pagoda was still in a public place, Hasegawa and his assistants recommended the five-story pagoda of Ichon. (The neighboring three-story pagoda was in poor condition at the time.)

Okura accepted and submitted the documents to have the pagoda shipped to Japan in October to the governor general. On Oct. 24, 1918 the five-story pagoda of Ichon was finally shipped.

According to Lee of the Ichon Cultural Center, the government or civic groups have only succeeded in recovering a handful of displaced Korean relics over the years.

The civic groups of Ichon took the first difficult step with their September visit. And while it wasn’t easy, Lee said the work of the current generation is important.

“As long as we know the pagoda is on the grounds of Tokyo’s Hotel Okura, we can’t idly sit by. Even if we can’t immediately succeed in its recovery, we must lay the foundation for future generations,” said Park Yeon-ha, the director of Five Story Pagoda of Ichon Recovery Committee.