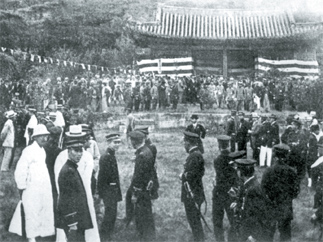 A photo of the National Exhibition held on the grounds of Gyeongbok Palace in 1915. [JoongAng Ilbo]

Kim Jeong-dong of Mokwon University claims to have first sighted the pagoda in 1995 during his stay in Japan as a visiting professor at the University of Tokyo. He was working at the time to have the remains of Jaseondang from Gyeongbok Palace returned to Korea. 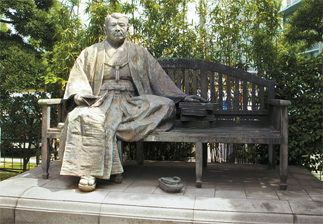 A statue of Kihachiro Okura on the grounds of the Okura Shukokan Museum of Fine Arts. Provided by the recovery committee.

The remains had been used in Japan as exhibition space under the name Joseondang, but the structure was destroyed during the 1923 Great Kanto Earthquake, leaving only the structure’s stone foundation. Records indicate some 692 relics and works of art were destroyed in the earthquake and fire.

Kim, a professor of architecture who is currently preparing a book on displaced Korean cultural relics in Japan, claims he no longer participates in efforts to recover the five-story pagoda of Ichon after the Tokyo visit in September. However, he did show concern about civic groups’ methods. 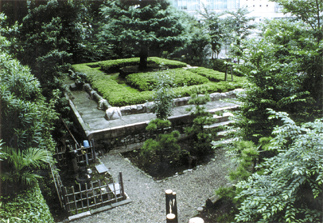 The remains of Jaseondang prior to their return to Korea. [JoongAng Ilbo]

“Many Japanese know about the pagoda because it has already been introduced in the Japanese print media and in an oversees Korean-Japanese magazine,” Kim said.

“I noticed a plaque providing the history and origin of the five-story pagoda of Ichon when I first came across it in 1995. However, the plaque is no longer there,” he said.

Part of the problem was a Korean television crew that used aggressive tactics to demand the pagoda’s return a few years ago. That, along with the emotional approach used by civic groups, has Kim worried.

Kim believes it’s important to make good relations with the representatives of the Okura Cultural Foundation through frequent meetings and quietly create networks that can help the entire cause rather than make noise through the media.