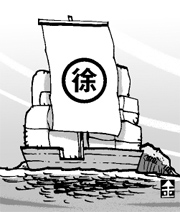 Xu Fu’s journey is one of the mysteries in the history of ancient China. At the order by Qin Shi Huang to find the elixir of life, Xu Fu led 3,000 boys and girls on a journey to the eastern seas. But the exact route of his journey remains unknown. “Shiji” or “The Records of the Grand Historian,” states that Xu Fu was headed for the Three Sacred Peaks and settled down in an area with a vast field and wetlands without giving a specific name to the area.

In Wakayama Prefecture, Japan, there is a gravestone dedicated to Xu Fu. Legend has it that Xu Fu discovered the medicinal plant tendaiuyaku there, settled down and eventually died in the region. In 1978 and 1982 when then Chinese Vice Prime Minister Deng Xiaoping and then Chinese Prime Minister Zhao Ziyang visited Japan, the plant was given to them as gifts. The Japanese authorities explained that they delivered the elixir of life belatedly, 2,000 years after Qin Shi Huang wanted to get ahold of it.

Although Xu Fu’s route is unclear, one thing is certain. Legends about Xu Fu in different areas in Korea and Japan symbolize cultural exchange in ancient East Asia. Xu Fu’s fleet included craftsmen of different fields and they carried seeds of five grains. Xu Fu is believed to be the one who opened Korea-China relations and the one who spread rice farming to Japan.

Last week, a ceremony was held in the Xu Fu Park in Seogwipo to unveil a piece of writing by Chinese Prime Minister Wen Jiabao. Watching the event, I came up with an idea. Summit meetings among Korea, China and Japan were started on Dec. 13 in Fukuoka. When it becomes Korea’s turn, Seogwipo will be a proper place to hold the meeting. If all participants of the meeting recall the history of exchange in the three countries through Xu Fu, minor conflicts or misunderstandings will be solved easily. If the green tea cultivated on a mountain on Jeju Island is served, instead of the elixir of life, the meeting will be just perfect.