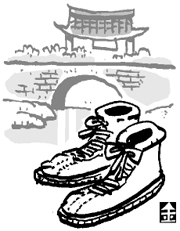 The poet happened to see a heartwarming sentence written in the old temple’s bathroom: “As if letting go of a heavy burden in your body, rid yourself of all agony and delusion.” In the temple’s bathroom, from which rose an offensive stench, he suddenly felt as if he were resting in his mother’s arms. While crouching under the pine tree, he couldn’t hold back the tears. After emptying both his body and soul, he wrote the poem.

Magnum Photos was the first cooperative agency for world-renowned photographers, co-founded by Robert Capa. Capa, who captured vivid images covering five different wars for over 20 years, rose to fame for his photo titled “Loyalist Militiaman at the Moment of Death,” while photographing the horrors of the Spanish Civil War. He won immortal fame for action photographs taken during the 1944 Normandy Invasion.

He was also famous for refusing the wedding proposal by a beautiful actress of the day, Ingrid Bergman, saying, “I have a different course in life.” Unfortunately, his destiny ended when he stepped on a land mine in Vietnam. Even though he had many juniors striving to follow his career path, he never asked them to meet his own standard.

However, he left the following sentiments for up-and-coming photographers: “Don’t be greedy for good equipment, but seek comfortable shoes.”

He tried to convey that as he worked harder and got closer to the scene, he succeeded in taking better photos.

The hard year is coming to a close. Many of our neighbors are suffering. I really feel that poverty is a severe punishment, lying somewhere between life imprisonment and the death penalty. People predict that next year will be even more difficult. Clearly, if the nation records negative economic growth next year, people’s lives will be fraught with despair and frustration.

Why don’t we first take a load off our minds at Seonam Temple in the few days left before the end of the year? It is of great significance to overcome all hardships and survive. The spring will certainly come again next year. The world is still a good place to live, compared to long periods of past poverty.