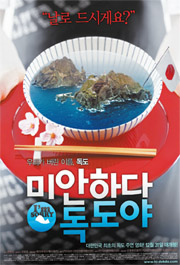 Korea has no shortage of sensitive social issues, but it does suffer from a lack of documentaries that probe those touchy topics.

But director Choi Hyun-muk, in his film “Sorry, Dokdo,” faces one of the most controversial issues of all. The film comes out today in some 100 theaters across the nation.

The documentary focuses on a set of rocky islets in the East Sea that are the source of much strife between neighbors Korea and Japan. Korea, which controls the islets, calls them Dokdo. Japan also lays claim to Dokdo, but calls it Takeshima.

Seo Kyoung-duk, a self-proclaimed “freelance Korean public relations expert” who has published advertisements about Korea in major international newspapers such as The New York Times, produced the film. Singer and philanthropist Kim Jang-hun stepped in as narrator. 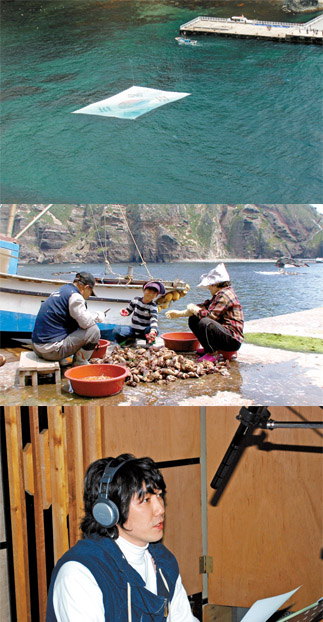 From top to above: a Korean flag made of handprints floats on the East Sea; the residents of Dokdo, Kim Seong-do and Kim Shin-yeol, with their grandson; and singer-turned-narrator Kim Jang-hun. Provided by Zio Entertainment

“I don’t want the film to be seen as political or patriotic,” said Choi, “but rather artistic and touching.”

“The film captures the lovely nature of the islets and speaks for the people who really care about the land.”

The story touches on the life of Kim Seong-do and Kim Shin-yeol - the only registered residents of the island. The story also depicts members of the Volunteer Agency Network of Korea, an activist group that promotes Korea globally. The film shows the process of a 25-day project that saw a massive Korean flag created from 6,000 handprints, which was then floated on the sea next to Dokdo.

“The film’s bottom line is that there are Koreans who truly care about Dokdo,” Choi said during a press conference last week at the Lotte Cinema near Konkuk University in eastern Seoul. Seo and Kim were also in attendance.

“The ongoing territorial dispute between Korea and Japan over the islets can’t be resolved politically,” said Seo. “Instead, cultural content like advertisements and films are powerful enough to let the world know that the islets belong to Korea.”

One of the hardships was the unpredictable weather around Dokdo. It was difficult enough to get to Ulleung Island, the nearest island and the only place where boats leave to Dokdo. Because of rough seas, vessels can only dock at Dokdo around 47 days a year.

Another difficulty the crew faced, Choi said, is a general ignorance about documentaries as a film genre in Korea.

“I was mentally hurt by the fact that documentaries aren’t loved as much [as commercial films],” he said.

The distribution company for Sorry, Dokdo also received threatening phone calls demanding that the film not be released. Some of the local coordinators in Japan who helped with the production even asked that their names not be listed in the credits.

“The emotional, sensitive elements could be seen as political,” said Choi. “But the film isn’t to criticize the Korean government for its ignorance on the matter, nor Japan for its militarism or territorial expansionism.”

In the upcoming months, the film will be released on DVD and sent to Korean schools abroad. The director also plans to introduce the documentary on the international film festival circuit. Choi and Seo are also discussing a sequel.

“The charm of a documentary is that it brings small changes from small hearts,” Choi said. “I’m not a member of the government, nor of a civic group. Nor am I a scholar who studies international law. My only purpose is to get people to sincerely face the Dokdo issue with their hearts and minds.”