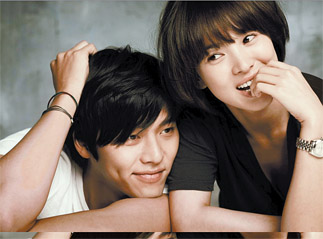 Seven was too few a number. Sixteen was too short.

Looking back at the demise of the TV series “The World They Live In,” those two numbers linger on. The series scored a much-lower-than-expected 7 percent audience rating and it ended after 16 episodes.

The run was simply too short for its fans living in a world where the number of episodes can stretch as long as an elastic band if the ratings remain healthy.

Earlier this month, however, the series, whose English title is “Worlds Within,” bid us farewell, leaving the star duo of director Pyo Min-soo and writer Noh Hui-gyeong feeling slightly bereft.

But there are still Worlds maniacs who wait for the reruns on cable at 1 a.m., sing the theme song in public places and haunt the show’s Web site like forlorn apparitions.

Of course, the maniacs include the one who dared to write about the show in these precious pages during its run.

Go ahead and call me prejudiced, but allow me to declare that Worlds is an ill-fated, mistreated and star-crossed masterpiece. What attracts and amuses me, in a slightly perverted way, is that the drama chose to be ill-fated. This choice of rocky road is obvious in comparison with another drama with a similar topic - “On Air” - one of the biggest SBS-TV drama hits of the year.

The two programs basically had similar story lines, about the people behind the scenes working on TV dramas, the directors, writers and actors.

In telling the stories, however, On Air chose to be overdramatic and maximize the spice that typified the conflicts that broke out between the characters while Worlds chose to minimize the melodrama.

Instead of showing the spats between the star actress, writer and director, where the love stories have an aftertaste as bitter as a spoonful of MSG, Worlds told the low-key yet heart-aching stories of all the characters.

This is the big, big virtue of the 40-something writer, Noh.

The axis of the drama is a love story between two young TV drama directors, Jun-young and Ji-o, touching upon the lives and stories of all the neighboring characters: an actress growing old and lonely, the decades-long unrequited love of an aged director for an equally aging star actress and the agony of a housewife who chooses to be vulgar as a means of survival.

In telling these stories, the writer doesn’t sensationalize the plot, preferring instead to exploit the human side of the story using a theatrical approach rather than a cinematic one. Noh must have been aware that this anti-commercial approach wouldn’t wash with the viewing public, but I guess she had to do what she had to do.

The jewel in the drama, however, is the love story between the two lead characters, Jun-young played by Song Hye-gyo and Ji-o played by Hyun Bin.

The drama focuses on how relationships start and crumble, and the actors require strong acting chops to carry the story.

Unfortunately, no matter how hard she tried, Song could not rid herself of the criticism that has plagued her poor performance, which is maybe one of the reasons the show tanked.

At least, Hyun, the actor, showed to the world that he can act (plus present a face worth looking at).

After watching all 16 episodes of the Worlds series, I thought up two wishes for the year. First, let the New Year bring more interesting TV shows, so I can fill this column with more exciting reviews.

And second, let more love into this mundane world of ours. You see, I agree with Noh and her recent book called “You are Guilty if You are not in Love.”

A memorable line in the book is “Thank you for deserting me, my dear first love.”

At least, there’s one certainty to look forward to in 2009: more dramas and stories by Noh.