What makes you happy?

In freezing temperatures, our reporting team spent three days interviewing passersby about what made them happy this year, what are their secrets to being happy and what they need the most to be happy.

We chatted to 102 people aged 19 and older at the Seoul Plaza in front of City Hall from Dec. 17 to 19, including street vendors and officer workers on cigarette breaks and businessmen on their way to meetings.

Not everyone agreed to answer our questions - it was bitterly cold, after all - but those who did said the experience gave them a chance to reflect on the past 12 months, resurrecting forgotten moments of happiness.


Appreciation: the secret to happiness

Positive thinking turned out to be the No. 1 secret to happiness.

Twenty-two of the 102 respondents chose it, saying they believe it helped them overcome problems.

“I think you become happy when you get rid of your greed,” said Song Ho-jeong, 42, a firefighter in Seoul. “We are born with no clothes, so everything after that is a bonus!”

“I try to be positive about everything. I believe it’s all a matter of perspective. If you look for the bad, you will find it in the end and chances are bad things will happen to you,” said Park Jae-hyeon, 25, a guard at the plaza’s skating rink.

Engaging in heart-to-heart conversation with close friends and family was another popular way to stay happy, an item picked by 12 people.

Many of the interviewees said talking to their significant other or their friends helped them forget unhappy feelings or experiences.

“I share with others how we overcame difficult situations. They help me get through hard times,” said Song Yeong-deuk, an entrepreneur we met at the Seoul Plaza.

“My friends and I chat about the stress factors at our workplaces. Meeting up with them is a really big help for me,” said Lee In-hyeong, a cafe manager.

Leisure time was also cited by many of the respondents - nine, to be exact.

They said they spend their time fishing, listening to music and taking photographs.

Ilmu, a monk, said he wishes to empty himself in 2009, adding that although he’s poor, he wants to use his poverty for a good cause. Na Yun-mi, a college student, said she wants to have peace of mind next year.


Giving back to the community

For some of the respondents we met, helping others in need was a recipe for happiness. Lee Gang-yeol, a 36-year-old technician, helps out at a Roman Catholic organization.

Two years ago he met a 60-year-old patient with Lou Gehrig’s Disease whom Lee referred to as Jung, who has had the neurodegenerative disease for the past 10 years. 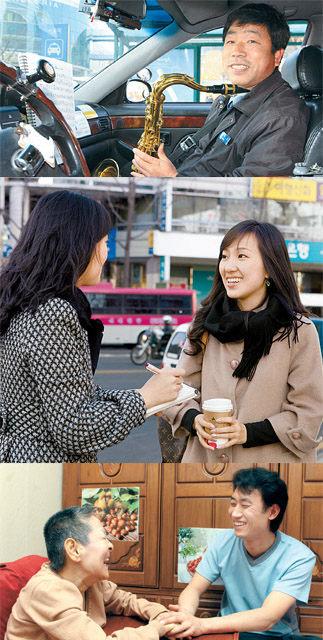 From top to above: Hwang In-kyu, a cab driver, says he was most happy in 2008 when he was playing his saxophone; 100 people were interviewed on the streets of Seoul about their happiest moments in 2008 earlier this month; and Lee Gang-yeol (right), a technician, said he felt a sense of happiness when taking care of people in need. [JoongAng Sunday]

The two became firm friends and a highlight this year was a trip to a beach in South Chungcheong, Jung’s first outing in a decade.

“Seeing Jung smile made me the happiest I had felt all year,” Lee said.

Others said music makes them happy.

They may not be professional musicians, but that doesn’t mean you can’t enjoy a good sing-a-long or some time spent crashing out tunes on a piano.

Hwang In-kyu, 58, a taxi driver for the last 25 years, likes to tootle on his saxophone when he is waiting for a fare. He learned the instrument in middle school and it’s now a constant companion.

“I play whenever I’m stressed. It never fails to make me happy,” the cabbie said.

When we asked the interviewees what they need to make them happy next year, a majority of respondents said a better economy, not surprisingly.

“I think with a stronger economy people in our office will be happier in general,” said Kim Min-gyu, who works at a travel agency.

Others were more specific about their wishes for next year, picking out studies and other means for self-improvement.

Lee Seong-lak, who works at a camera manufacturing company, hopes to further his professional skills, while Kim Jin-a, a hotel manager, wants to study French - she dreams of becoming a sommelier.

Landing a job was another major wish among the respondents, chosen by 15 people.

Other wishes for a happy 2009 included getting a boyfriend or girlfriend, getting married, winning the lottery and seeing an increase in stock prices.


Getting into the habit of being happy

According to the Merriam-Webster dictionary, happiness means “a state of well-being and contentment” or “a pleasurable or satisfying experience.”

In 2005, the British Broadcasting Corporation aired a documentary on a social experiment on happiness.

A group of so-called happiness specialists from fields like psychology, business consulting and social entrepreneurship worked to improve the happiness levels of people in the Berkshire town of Slough.

The team devised a 10-point plan for a three-month period that included nurturing plants, having long conversations with loved ones, calling a friend whom they hadn’t spoken to for a while, giving themselves a treat every day, and so forth.

“The dramatic change in the volunteers’ happiness is powerful proof of what this experiment achieved,” one of the experts, Richard Reeves, was quoted as saying at the time. 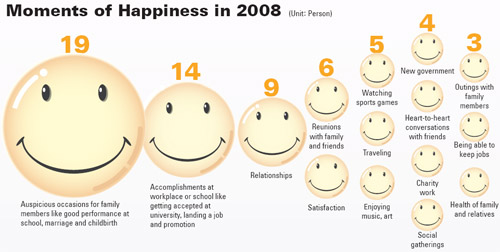 In economics, Gross National Happiness has emerged to define the quality of life in a more holistic way than the gross national product.

A study by Britain’s New Economics Foundation in 2006 unveiled what is called the “Happy Planet Index” using this new measuring stick.

Vanuatu, a small island nation in the South Pacific, took top spot. Its GNP was 207th of the 233 countries around the world, indicating that money can’t buy happiness.

As our team sought to dissect Koreans’ recipe for happiness for the past year, we also found this maxim to be true.

Koreans seemed to be happy in 2008 for their family, friends and the time and memories that they share with them.