‘Misers’ know how to stretch a won

‘Misers’ know how to stretch a won 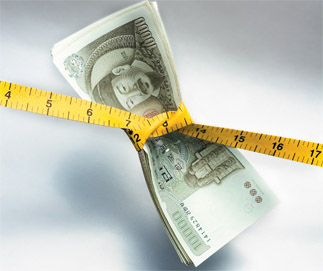 Baek Yun-mi, 27, is getting married in May, and the theme of her wedding is “discount.” Due to difficult financial circumstances, Baek and her fiance thought of postponing the ceremony. But realizing that “the more they know, the more they can save,” they decided to go ahead and tie the knot. Through Baek’s diligent bargain hunting, she will save 10 to 50 percent on various wedding expenses like invitations, clothes, catering and the honeymoon.

“First, I downloaded a wedding checklist from the Internet, and then I searched online for the lowest prices for the items I need. I also found a wedding show, and I registered to participate. The exhibitors offered items at lower prices for registered participants,” Baek said.

Baek had originally planned to spend 25 million won ($19,525) for her wedding, but she ended up shaving 7 million won off the cost. All she has to do now is count the days before the big event.

Baek’s story was recently posted on an online community that shares tips on saving money. The Web site (http://cafe.daum.net/mmnix), is dubbed jjandoli, Korean slang for a miser. It has more than 649,000 members, making it one of Korea’s biggest online communities that promotes frugality. Baek’s story received dozens of replies, mostly thanking her for the useful information.

Amid this year’s gloomy economic forecasts, such online gatherings are gaining popularity among Koreans hoping to survive difficult times. The number of page views is estimated to be about 1 million per week, according to the Web sites’ organizers.

Kim Du-hwan, 28, runs one such community called Alddljok Cafe (www.alddl.kr). The term alddljok is also a newly coined word for those who live a frugal life. Kim opened the community in 2004, but he says the number of page views has increased by 40 to 50 percent since the fall of this year when the economy began to falter.

Kim said his Web site differs from others in that it encourages spending, as long as it’s wise.

“Consumption is vital for the economy. So our Web site is not about not spending any money at all, but rather how to spend as little as possible using coupons and earned points,” Kim continued. “Many people don’t take advantage of such opportunities because it’s cumbersome. But these days they are missing out on a lot because many companies offer coupons and points to encourage spending.”

Kim also published a book last year called “The White Book for a Frugal Life.” With his accumulated expertise in smart spending, he got a job this summer at Enuri, a Web site that provides information about product prices.

In a recent survey, 40 percent of Korean parents said they were cutting back on their children’s education this winter, deciding not to send their children to special camps during school vacations. The phenomenon is a telling sign about the declining economy, given the enthusiasm for education among Korean parents.

Among housewives, classes giving lifestyle tips to save money are increasingly popular at community centers. A series of lectures on investments, real estate and 2009 financial forecasts were recently organized by community centers.

Local department stores also organized classes. Shinsegae Department Store added a lunchbox cooking class and a hands-on workshop for “do-it-yourself products” to young mothers in the winter semester, which runs through February. For an extra 1,000 won each, additional family members can participate in the workshop.

“There were increasing demands for classes giving practical information for everyday life among housewives, who make up a majority of our students,” says Yoo Ho-jeong, the center’s Gwangju-based programmer. “We recently invited a celebrity blogger to teach everyday home cooking, and it was a huge hit. This is a rare phenomenon. Before, our programs focused primarily on lifestyle topics like wine tasting or art history classes.”

While frugal dining tips like collecting coupons and searching for budget restaurants were considered an option, others simply prefer to cook more at home or eat in company cafeterias to cut back on dining out.

Lee Hye-gyeong, an office worker at a cosmetics company, started bringing her lunch to work last month because she wants to save the 5,000 won she spends each day for lunch. She was the first person in her office to start packing a lunch for work, but her colleagues now join her every day in the company’s conference room.

“I see many mothers clipping coupons and getting their point cards stamped at family restaurants and coffee shops when they pay their bills,” said Ahn Ju-young, a housewife with two sons. Ahn said she notices grocery stores get crowded after 9 p.m. these days because families come to buy discounted products at the end of the day. “Many take advantage of mileage systems and even choose their travel destinations based on a list of discount hotels and resorts provided by credit card companies.”

Many overseas travelers also visit banks and travel agents before leaving home. They exchange their money and choose travel dates when rates are low and oil surcharges are minimal.

Other Koreans are taking more traditional approaches to cutting daily costs, like taking public transportation instead of driving their own cars to save on fuel. The so-called “BMW tribes” - those who go to work by bus, metro or walking - are increasingly visible through Seoul, while some even bike to work.

Changing habits are also seen as a way to save money.

Used toys, books and household items can be exchanged for extra cash as more people sell them on Internet sites for secondhand goods. Internet sites that buy and sell used office furniture have seen sales increase by 15 to 30 percent, according to a recent survey.

In the book, “Riches through Housekeeping,” author Je Yu-gyeong explains that keeping records of your spending is also a major way to control expenses. She notes that account books are often overlooked in home economics because most consumers want to earn cash through grander methods like buying stock or real estate.

Whether rich, poor or working class, Koreans from every walk of life are preparing for next year’s harsh economic conditions.

“You think the global crisis is not going to hurt employees at big Korean companies like Posco or Samsung,” says Kim Seon-hong, a manager at a local steel manufacturer. “But for the generation of Koreans who experienced the nightmare of the Asian financial crisis in the ’90s, there is an immediate sense of crisis that we need to tighten our belts.”