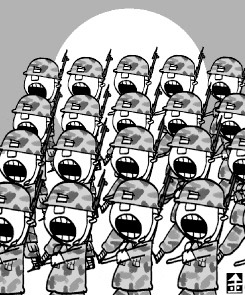 There is a song most Korean male adults know by heart. They have to loudly belt out the words day in and day out during the tough training days of their mandatory military service. When they hear the song again years later, some might feel a nostalgic pang for the lonely, cold nights spent away from their home and family. Young men these days may not have heard the tune so often, but to those who were called up until the 1980s, the song isn’t easily forgotten.

“The Marcher’s Morning” starts like this: “On seeing my hometown in a dream I had at the crack of dawn/ My heart feels anew as I put on my coat and helmet.” The musician Kim Dong-jin wrote the music and Kim Young-sam penned the lyrics around 1952.

Strictly speaking, the song is not a military song, but a popular song among the troops. A military song is made and distributed by the Defense Ministry. But The Marcher’s Morning is different. It’s a soldier’s song.

Back then, the melody and words touched the hearts of many soldiers, as the soft, plaintive tune encapsulated the pathos of a soldier burdened with thoughts of his family as he trudged toward daylight and imminent battle.

In China there is also an old saying inspired by daybreak and war. The phrase “Lying on a spear waiting for the dawn” arose from the friendship between two comrades in the Western Jin Dynasty. The two always rose early in the morning for training to prepare for war. One day, one of the warriors wrote to the other, “I lay on my spear to wait for the morning sun ... in fear that I would keep you, my friend, waiting.” The words relate to the restlessness and strains of a soldier on the eve of combat.

As we pass into 2009 perhaps our feelings are similar to these pre-dawn thoughts felt by the soldiers. Korea faces a perilous future and unfamiliar terrain. Economic turmoil looms like the threat of attack. The tide has turned and a deep depression has been predicted. Households are bracing themselves for job cuts. It’s as if many of us are steeling ourselves for a fight.

We need to strengthen our minds with the same determination and resolution as if readying for battle. Let’s tighten our shoelaces and belts and wait.

“Here in our land where waters are clear and mountains are beautiful/ We march ahead to light up the dawn,” concludes the song.