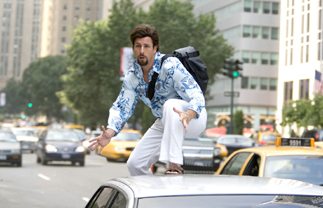 Adam Sandler is Zohan, a gravity defying commando who becomes a hairstylist. [MovieWeb]

Adam Sandler’s “You Don’t Mess With the Zohan” tries to a squeeze a laugh out of every minute of screen time, leaving virtually no time for gravitas and reflection. Even though I can barely remember the plot, I do remember laughter pretty much throughout.

But you might not feel so proud of yourself by the time the final credits fill the screen. This is toilet humor and sexual vulgarity at its worst, or best, depending on your point of view. One of the funniest scenes has Zohan (Adam Sandler) working as a stylist and a male prostitute in a hair salon, though you won’t want to tell your friends why you laughed if they are a little prudish.

Zohan is a top Israeli commando with supernatural powers: He defies gravity and can jump hundreds of feet in the air. But Zohan is sick of life as an ace agent fighting Palestinians the whole time.

In fact, Zohan dreams of a career as a hairstylist. Every night he opens an outdated catalog written by American hairdresser Paul Mitchell, a publication he treats like a holy book.

He makes up his mind to be a hairstylist. He fakes his own death while battling with his old Palestinian archenemy, Phantom (John Turturro), and smuggles himself into the United States in a transport cage with two dogs named Scrappy and Coco.

In the U.S., he disguises himself as an Australian named Scrappy Coco, even though nobody believes he comes from Australia because of his strong Middle Eastern accent. He auditions at several hair salons, and finally gets hired by the beautiful Palestinian Dalia, a hairdresser with whom the Israeli inevitably falls in love.

Soon, Zohan faces a crisis: competition with the Phantom, pitting age-old enemies against each other.

However, their real enemy turns out to be a greedy American developer Walbridge (Michael Buffer). In order to build a mall, Walbridge wants to destroy a street full of Arab and Israeli businesses, thriving with falafel and hummus shops. Zohan and Phantom unite to fight the American.

You Don’t Mess With the Zohan deals with the seemingly never-ending conflict between Israeli and Arab, but the story doesn’t dig very deep and uses stereotypes to explore one of the world’s most pressing issues: the Middle East conflict.

Of course, the movie is trying to use humor to take a look at the problem from a different angle, and this is an Adam Sandler movie, so expect gags rather than political and religious philosophy.

You Don’t Mess with the Zohan