Detox for the New Year with mugwort, juice, yoga

Detox for the New Year with mugwort, juice, yoga 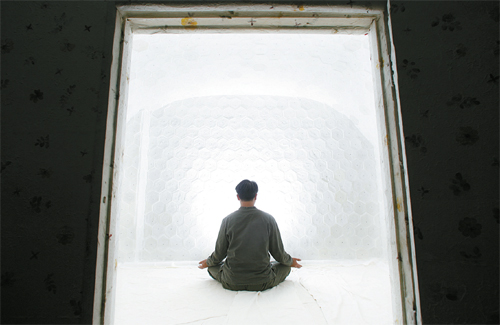 The salt block cave at the Uri Hanbang Clinic in Ilsan, Gyeonggi. By Jeong Chi-ho

It’s half past noon and diners are cramming into the fast food chains on the top floor of a busy 10-story commercial complex in Ilsan on the northern outskirts of Seoul.

But down the corridor inside “Uri Hanbang Center,” one of many fasting clinics in Korea, no one’s eating lunch.

Instead, Kim Yu-na, a 29-year-old customer service staff at a local telecommunication company, lies on the matted floor of the center’s living room in her sweatshirt and pajama pants bathed in the pungent scent of burning incense.

A small pot of burning mugwort is sat on top of her stomach, a process known as moxibustion, a common treatment in Chinese medicine.

Kim joined a 10-day fasting program at the center recently to help strengthen her metabolism, and the mugwort is a key part of the therapy.

The herb is said to make women more fertile and boost men’s sex drive after it seeps through the skin of a person’s belly and into the body’s vital organs, according to the center’s director Park Dae-cheol, who oversees about 10,000 members nationwide. 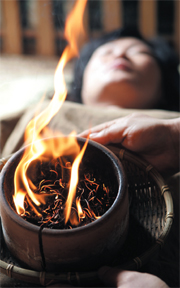 A bowl of burning mugwort leaves used to strengthen the bodies’metabolism.

Aside from the moxibustion treatment, visitors at Uri undergo a number of programs designed to help them reduce cravings for food and relax their stressed-out bodies.

The clinic has a number of treatments that it has developed itself in the tradition of Oriental medicine.

For example, one therapy involves placing a poultice made of soybean paste on a person’s abdomen to help the body release flatulence from the digestive system. It also helps focus heat on the lower part of the body, which, in Oriental medicine, helps treat headaches.

Another therapy is known as “oral meditation” and it is supposed to strengthen a person’s weak internal organs through the use of sound.

People trying out the treatment are shut in a cave-like space in the clinic and asked to repeat words on a list with their mouths fully closed.

News of this type of traditional therapy has spread beyond Korea’s borders. Park said Japanese tourists and businessmen from the Middle East are among those making appointments for sessions at the center.

In addition to the poultices and smoldering herbs, fasting is an age-old habit in Korea, and one that appears to have some health benefits. It has a long tradition in religious practice all over the world and in Korea, too.

Buddhists have practiced abstinence for years and it was later adopted by local Christians who set up retreats in rural areas where believers could congregate and eat frugally for a period of time.

A more extreme version is when local politicians or other prominent citizens put themselves on hunger strike as a militant form of protest.

But fasting isn’t necessarily a spiritual endeavor in Korea. At certain times of the year, and especially at the start of a new year, Koreans use fasting to mark a new transition in life. It’s seen as a chance to flush away toxins built up over the past 12 months and start afresh.

“Fasting is clearly a form of meditation,” says Park, who has run his clinic for 20 years.

“Many people who have tried fasting admit that the level of comfort they achieve through abstaining from food is often more satisfying than the pleasure of eating,” he says.

It’s no surprise that in Korea, where the health industry for stress management and anti-aging creams and processes is on the rise, detox diets that involve fasting are attracting attention. 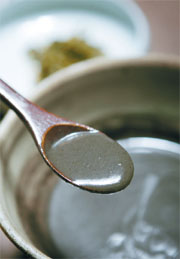 A bowl of black sesame and brown vegetable porridge.

Fasting advocates the belief that chemical contaminants accumulated through bad eating habits and the consumption of alcohol, drugs and tobacco have to be dispersed in order for the body to rejuvenate itself.

The idea is apparently interesting patients with chronic illnesses who are seeking an alternative to standard medical treatment here.

Kim, the 29 year old under treatment at the Uri Hanbang Center, had been under medication for manic depression for three months. Her problems were alcohol and stress: she was working through an average of three to five bottles of soju at least five times a week.

Last month, she asked her bosses for three months of sick leave and checked into the clinic.

For the first week, she was given nothing but water. On her seventh day, they gave her a half cup of watermelon juice and vegetable extracts followed by a warm mixture of brown rice and crushed beans. 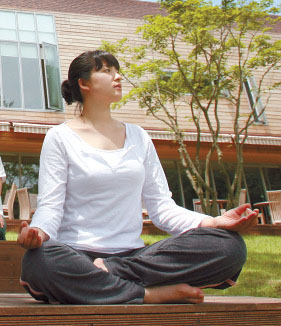 A patient meditates at Healience, a health resort in Gangwon Province that specializes in anti-aging and stress care. [JoongAng Ilbo]

Kim will stay in the clinic for about 20 days.

“I turned off my mobile phone, canceled all my year-end arrangements and told my close friends that I was going to be traveling for a while,” she says. “It’s been the right choice. My head feels clearer. I don’t feel as anxious as before. I actually feel that I’m a brighter person now.”

Before Kim checked in, she was asked to leave all her medications at home. All patients are asked to do this including those with high-risk diseases such as diabetes and high blood pressure. She says she was worried at first, but after a week, she started sleeping better at night.

While fasting is embraced in Chinese medicine as a way to cleanse your digestive system, Western medicine has been more critical about it in the last few decades. Doctors have argued that fasting elevates blood sugars and takes extra protein from muscle because the natural process of glucose production slows down in people who don’t eat.

“The idea of detoxifying itself is a false notion,” says Kim Seon-mi of general practice at Korea University Anam Hospital. “You can stop eating food with toxic substances such as in instant food, but there is no natural way for our body to detoxify aside from the natural function of excretion we already have. The closest alternative is to eat less and exercise regularly.”

But recent studies have shown that fasting can enhance the immune system in critical medical treatments such as cancer. A research team at the University of Southern California recently reported that healthy cells in people with cancer who fasted for 48 hours before receiving chemotherapy were less affected by the treatment, suggesting that fasting might help to boost a noncancerous cell’s resilience.

Fasting and other alternative treatments tend to blur the barrier between natural science and Western medicine.

“Our bodies are capable of their own natural healing process,” says Bae Chul-young, a specialist in preventive medicine and a program adviser at Healience, an upscale health resort run by a veteran Korean psychiatrist. The resort uses juice fasting as part of its dietary regimen. “Through fasting, we’re trying to reset our digestive system as a preparation to develop a new eating habit.”

Healience is a combination of the words healing and science and it promotes a set of programs including juice fasting and meditation aimed at reforming people’s not-so-healthy lifestyle habits.

With programs run by three professional doctors, the catchphrase at the center is to live a healthy life for 99 years and die peacefully in three days.

The cost of the program ranges from 490,000 won ($388) to 3 million won for three to five days of workshops, spa treatments and juice fasting.

“Chinese medicine defines illness as a result of bad eating habits,” says Lee Hyeong-cheol, a doctor at Jasaeng Hospital of Oriental Medicine. “But not all patients have benefitted from fasting through our treatments. Past studies have found that it was most effective among patients with digestive dysfunction.”

* This health resort is run by Lee Si-hyung, a veteran psychiatrist. It offers advanced facilities for anti-aging and stress care including a spa, gym and forest walks. Expect to eat nothing but juice and light meals of porridge with fresh vegetables for their anti-aging courses. Programs include meditation, yoga and a lecture series by medical specialists and nutritionists. Mobile phones are automatically blocked and there is no TV. There is a “stress zone” with Internet facilities, but it’s for emergency use only.

* Specialized treatments here are aimed at infertility, liver cancer and asthma. A separate detox center within the hospital offers spa treatments, acupuncture and massage. There is no breakfast as a general rule, and juice is the main diet aside from salad, fish and seaweed. Special packages are available for foreign travelers. Prices start from 150,000 won. ($118).

* After a medical check-up with a specialist in Chinese medicine, patients take herbal baths and spend time in the different types of sauna rooms available. Meals are built around herbal selections and there’s a generous supply of tea. The center is built on a mountainside in a traditional style of architecture called chorakdang, which means a place to enjoy nature in Korean. There are several sauna rooms available including a yellow mud facility.

* This is a clinic for Chinese medicine with detox programs ranging from two to 20 days, including acupuncture, moxibustion and colonic and intestinal irrigation. Prices start from 200,000 won.

* This fasting center offers a 10-day program including a yoga class and various massage services. No food is given during the first seven days. Special grain porridge and fruit extracts are provided near the end of the stay. A two-week diet of suggested foods is provided after the program.