[BOOKS in brief]Collective responsibility of poverty

[BOOKS in brief]Collective responsibility of poverty 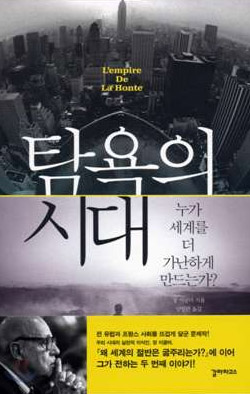 “Famine is like an invader that attacks me and a beast that teases me,” writes Jean Ziegler in “The Empire of Shame,” a 2005 publication recently translated into Korea.

“I cannot do anything to prevent famine. I shouldn’t be ashamed of my dirty clothes, the cry of children, my useless body and my inability to feed my family members.”

Ziegler, a Swiss sociologist and the UN Special Rapporteur on the Right to Food from 2000 to 2008, tells us that the number of people living in extreme poverty amounts to millions throughout this world. Every five seconds, a child under 10 dies of malnutrition or hunger.

In 2001, Ziegler focused on this reality in his book “UN: Still Hungry to Bed,” which questioned why half the world starves. In The Empire of Shame, the author looks at who makes the world poorer.

With his previous book, the author found the cause for continual increase of starvation and famine to be the free market system. According to him, food such as corn and grain are dominated by just a few financial capitals.

His latest claim is big corporations are the new feudalistic powers and he criticizes them for trying to make quick profits in the shortest possible period of time, behavior that makes people around the world even poorer.

Crushed by debt, poor countries can’t invest in schools, hospitals and other institutions, creating a cycle of poverty from which it is almost impossible to escape.

Who’s responsible? Ziegler emphasizes the importance of collective responsibility and argues that we all share the blame. Until we realize this, the poor will continue to be poor, and the wealthy will remain unchecked. By Baek Il-hyun