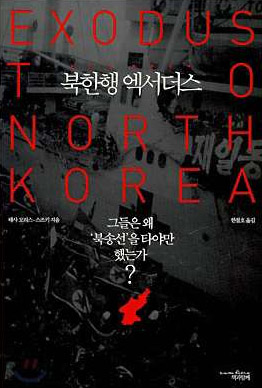 In the South it is called “Repatriation to the North,” while in North, they call it “Homecoming.” The “it” here refers to the incident when about 93,340 Korean residents in Japan moved to North Korea from 1959 to 1984.

Though it was a long-term business plan - it spanned about 25 years - about 80 percent of the travelers moved in the first two years.

It was as if one-sixth of the Korean residents in Japan suddenly disappeared.

Tessa Morris-Suzuki in “Exodus to North Korea: Shadow from Japan’s Cold War,” recently translated into Korean, argues that the migration was little more than a carefully planned expulsion, a conclusion she reached after examining declassified documents from the International Committee of the Red Cross. In 1953, Jochongnyeon, the General Association of North Korean Residents in Japan, started the Homecoming movement with Pyongyang’s support. But the author claims the IRC in Japan started preparing for the expatriation of Korean residents in Japan after World War II concluded in 1945, because Koreans were regarded as poor, useless immigrants.

The author also argues that 97 percent of the immigrants originated from the southern part of the Korean Peninsula and later moved to Japan, so a one-way ticket to the North was hardly a homecoming. It is also unlikely that they were communist sympathizers, she argues. Most of the migrants just wanted jobs, and work was one of the carrots dangled to induce the so-called homecoming.

The book is ultimately unsatisfying. Morris-Suzuki fails to explain why North Korea desired such a large big group of immigrants en masse. But what is clear is that those who left Japan suffered enormous hardship when they wound up in North Korea. By Bae No-pil