Wittily debunking the myths to the secrets of success

Wittily debunking the myths to the secrets of success 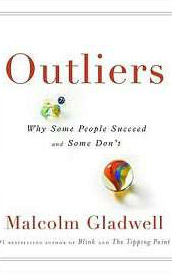 Why do some people succeed?

Why did Bill Gates become one of the richest men ever to stalk the planet, while hundreds, perhaps thousands, of equally talented computer software boffins during the 1970s are today struggling to pay off their mortgages?

Challenging our stereotype of “the successful man,” Malcolm Gladwell, in his new book “Outliers,” says how successful people rise on a tide of advantages, such as practice hours, year of birth or just plain luck.

The author argues that Gates was in the right place at the right time but, just as important, he put in time. He spent a very long time tinkering with software.

According to Gladwell, a journalist and the best-selling author of “The Tipping Point” (2000) and “Blink” (2005) who worked as a business and science writer for The Washington Post and currently works for The New Yorker, it’s not just talent. You have to work hard to succeed.

Gladwell came to notice through his first book, The Tipping Point, by suggesting that little things can make a big difference.

In his second book, Blink, he emphasizes the importance of snap judgments and mind reading as a gift.

In his latest book, he examines the secrets to success, wondering why some people achieve their dreams and others do not.

In the beginning of 1990, psychologist Anderson Erickson did an experiment looking at natural gifts and effort with violin students at a music school in Germany.

He divided them into three groups: students who could become distinguished violinists, ordinary students and students not likely to make it professionally.

Common beliefs at the time assumed that natural talent was crucial to success in the music field. But Erickson’s experiment yielded unexpected results.

The students in all three groups started playing the violin about at the age of 5 and practiced for about the same number of hours per week.

But after some time, it emerged that the first group of students practiced for 10,000 hours by the time they reached 20 years of age.

“If you want to shine, put in 10,000 hours,” says Gladwell, claiming that Gates spent that much time on computers before he was in a position to set up his own company.

The year people are born can also be a key to success.

To explain this, Gladwell examined a list of the 75 richest people in history. Gladwell finds that “an astonishing 14 are Americans born within nine years of one another in the mid-19th century.”

The author writes: “In the 1860s and 1870s, the American economy went through the greatest transformation in its history.”

People such as John D. Rockefeller, Andrew Carnegie, and J.P. Morgan were the right age to take advantage of this transformation.

Malcolm also debunks the myth that I.Q. leads to success.

Instead, he emphasizes practical intelligence, the ability to apply knowledge in real life.

Critics say Gladwell hasn’t come up with anything new, arguing that practical intelligence is no different to Robert Sternberg’s label of emotional intelligence.

Nonetheless, Gladwell has produced a series of interesting ideas that try to account for why some people make it big and some are thwarted, while others don’t even bother.