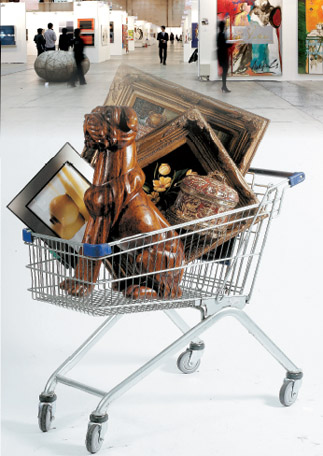 The local art scene is currently sailing through choppy winter waters. A number of galleries and art auction houses have closed down their hatches and the country’s major art fairs were all at sea last year.

But now things just got a whole lot worse, people in the art world think.

The National Assembly approved a 20 percent capital gains tax last month on works by dead artists that cost over 60 million won. From 2011, private art collectors and artists will have to pay the surcharge.

Many in the industry feel that the art world will suffer as a result of the imposition. Some 140 galleries shut down for two days in November in an attempt to bring down the proposed tax, so fierce was the opposition. 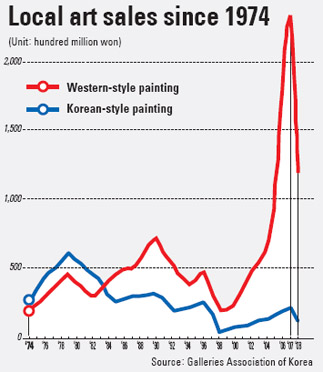 “The taxation plan will impose a huge mental burden on both artists and collectors,” said Choi Byung-sik, a professor of fine arts at Kyung Hee University in Seoul.

In one last desperate act before the tax was approved, members of the Galleries Association of Korea and artists delivered documents opposing to the tax plan to the National Assembly in Yeouido, central Seoul, but to no avail.

In support of the tax, Jeon Byung-mok of the Korea Institute of Public Finance, a government organization, said, “In principle, all art collectors should have been paying a sales tax. In the 1990s though, the local art market wasn’t as big as now and there weren’t many art trades.”

Now the art market has started to generate large amounts of money, or did until the recent economic downturn, the government sees the tax as a way of regulating the industry.

“With the market growing immense, artworks have been considered as a way to make big money,” Jeon said. “The art trades should be regulated now before the market becomes too big and corrupt.”

However, even members of the government opposed the introduction of the tax.

Kim Yun-sub of the Korean Arts Managements Institute was also critical, pointing out the capital gains tax will freeze up an industry that is already suffering.

“Tax should only be imposed on stable, regular incomes, but the art industry is weak at the moment and the tax will not help but rather hinder development,” Kim said.

Kim’s fears refer to the dramatic downturn that the art world faced last year following the successes of 2007. That year saw a number of new galleries and auction houses open and an abundance of exhibitions.

When the market was at its peak, the priciest item sold was an oil painting by the late painter Park Soo-keun (1914-1965).

At the Seoul Auction event in May 2007, “A Wash Place,” a painting that depicts six women from the Joseon Dynasty (1392-1910) washing their laundry beside a stream, was sold to an unidentified bidder for 4.5 billion won ($3.6 million).

But then things started to sour.

Park’s painting is currently entangled in a forgery scandal. Last month, a local art magazine published an article claiming that the painting is fake.

In response, Korea’s biggest auction house Seoul Auction, which sold the painting, has filed a 3 billion won lawsuit against the publication.

Further scandal broke when Shin Jeong-ah, former co-director of the Gwangju Biennale and former professor at Dongguk University, was found to have forged a doctorate degree from Yale University and to have been involved in a love affair with former presidential policy planner Byeon Yang-kyoon.

Byeon resigned from his government post for apparently lying about his relationship with Shin, a figure in the art world who had come to represent the industry’s growth and vitality here.

The total amount in the local art trade reached 400 billion won in 2007, but the amount declined 50 percent to around 250 billion won today.

Art experts say the global economic slowdown is preventing art collectors and dealers from investing in art, a blow to companies that have recently set up art-related financial products such as art funds.

Following the successes seen in 2007, local investors began to see art not just as something to appreciate for beauty’s sake but as a worthy financial speculation.

Calls for a capital gains tax on artworks have been heard before. The controversial subject has been around since 1990 when lawmakers argued that a sales tax was fair since “tax always follows income.”

But art circles argued, as they do today, that the tax would scare off big collectors. A sales tax would create an official record of a sales, which might worry people who want their purchases kept out of the public eye.

The controversial tax was delayed and dropped altogether for a number of years, but interest rekindled last September when the Ministry of Finance and Strategy presented its new bill in a bid to make the art sales more transparent, which could regulate the industry, a major concern following the scandals around the alleged forgery of the Park painting, A Wash Place.

In essence, the art world doesn’t think it is ready for the tax. “The local art scene isn’t stable,” said Choi of Kyung Hee University. Choi has a point. We only need to look at the headache facing the National Museum of Contemporary Art, Korea, in Gwacheon, Gyeonggi, which remains leaderless since Kim Yun-soo, the former head, left office last year after six years in office, blamed for inefficient use of the budget and poor planning.

While fewer visitors headed to the museum, the Culture Ministry criticized Kim for purchasing a 600 million won painting by French artist Marcel Duchamp (1887-1986) in 2005.

“The Korean art industry is yet short in history and lacks resources compared to the West,” said Lee Hyun-suk, the head of the Galleries Association of Korea, in her argument against the tax.

The artist Hwang Young-sung, who attended the protest at the National Assembly last month, was also concerned that high-rollers might back out of the art market now that the tax has been made law.

“Collecting expensive artworks is considered as a luxury in Korea,” Hwang said. “High-end collectors bring life to the industry. Someday, the tax will have some efficacy but it isn’t the time now. Neither will it be in several years.”

But seeing that some members of the wealthier classes have made money investing in art, Choi Young-jeon of the Finance Ministry’s tax department thinks the time is right for the controversial tax.

“It is fact that no one likes to be taxed,” Choi said. “But where there is income, tax must follow.”

Compared to the 1990s, Choi says the conditions of the local art industry have improved and it is now time to leap for more transparent art trades.

The tax department official pointed to developed countries such as France, the United States and the United Kingdom that have similar taxes on art to Korea’s news capital gains tax.

The art industry in France exceeds 4 trillion won annually, and commercial galleries and auction houses have been paying taxes on artworks since the 1950s and personal collectors from 1995.

But local art experts say the art industry in these countries are highly developed with long histories.

In contrast, according to the Korean Fine Arts Association, only around 40 of its 60,000 members are considered worthy of competing on the international stage. The tax will be an obstacle to the future development of the local art scene and prevent local artists from getting the support they need.

“It is more urgent to cultivate, discover and support more quality artists than introduce new taxes that will further weaken an industry that is already suffering from the economic crisis,” argues Choi of Kyung Hee University.