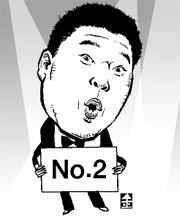 In 1962, Avis, a small car rental company in the United States, succeeded in attracting people’s attention by unveiling an ambitious advertising campaign - “We are No. 2. We try harder.”

This series of ads achieved phenomenal success. Avis was considered the second-largest company in name only. Hertz, with a 70 percent U.S. market share, was incomparably better. However, Avis thrived and saw a 50 percent growth in profit in that year alone, thanks to the successful ads. Although it is still not No. 1, it is a world-renowned company with assets of $6.9 billion as of the end of 2007. The term “No. 2 marketing” is included in a variety of advertising textbooks.

What is behind Avis’ successful strategies, despite the adage “No one remembers who comes in second in any competition”? No. 2 marketing is focused not on beating whoever is ahead, but on securing one’s ranking ahead of those in third, fourth, and fifth places. At that time, Avis’ advertisements made consumers think Avis and Hertz occupied similar market positions. Avis experienced unprecedented growth, becoming a rival to No. 1 by outstripping all its competitors.

If we fail to comprehend the hidden meaning, No. 2 marketing has no effect. In Korea, there have been several similar advertisements for insurance and noodles, in which companies put themselves forward as No. 2. However, they failed to create a sensation because they only mimicked the strategy’s external form.

On the other hand, one entertainer successfully put the precepts into practice and yielded excellent results in his field. He is a famous comedian, Kang Ho-dong.

According to a poll for “entertainer of the year” conducted annually by Gallup Kore, Yu Jae-seok won 49.9 percent of the vote and has been named the most popular comedian for the past four consecutive years. Kang Ho-dong ranks second with only 37.7 percent of the vote. However, he really emphasized all year in his programs that “the best M.C. in Korea is Yu Jae-seok.”

For example, after winning the KBS Entertainment Awards Grand Prize last Saturday, Kang Ho-dong asked as he stood on stage for his acceptance speech, “Jae-seok, is it O.K. for me to accept this award?”

He displayed modesty by denying his superiority. His attitude also contributed to softening his aggressive image. He may be a true winner in showbiz for the year 2008.


This writer is an entertainment editor of the Daily Sports.