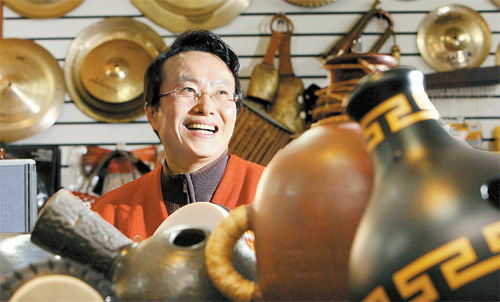 A story goes that in the spring of 2003, French-born American conductor Lorin Maazel requested a 40-inch double bass and a 40-inch tam-tam, a kind of gong, “at any cost.”

He was in Seoul to conduct Shostakovich’s Symphony No. 5 with the Seoul Philharmonic Orchestra and he was very specific about his requirements.

The representatives of the orchestra were at a loss. Korea doesn’t have a cast supply of instruments and they couldn’t find what the maestro wanted. In desperation, they turned to Park Chang-tae, 49, who was developing a name for himself for unearthing rare instruments at the 11th hour.

Sure enough, Park lived up to his nickname “Emergency 911” and he saved the orchestra from embarrassment.

The head of the Professional Technicians Society, or P.T.S., a musical instrument rental service company, Park makes a living by supplying musicians with rare instruments.

“The bigger the stage, the more instruments you need,” Park says. “Unfortunately, however, even big bands don’t have all the instruments they need for a performance. That’s when they put out an SOS to me.”

For instance, well-known conductors often request specific instruments for a performance but most of the time, the promoters of the concert can’t get their hands on exactly what has been asked for.

In such circumstances, some of the more volatile characters in the music world might throw a tantrum and pull out of the show. That’s why Park’s services are so vital.

Over the years Park has collected more than 6,000 different kinds of musical instruments, and has over 30,000 in total, half of which are percussion. The remaining are electronic and folk instruments.

It’s quite a collection, and people in the local music scene consider it the best in Korea, perhaps better than collections in the United States, Europe and Japan.

European music colleges usually have around 300 to 400 instruments, and the biggest rental company in Japan only has 10,000 percussion instruments on its books. In the United States, there are only a few small-sized rental companies in each city.

“We [P.T.S.] can supply any kind of musical instrument, any size, anytime and of any value,” Park said. “I can proudly say our company is the most unique in the world.” 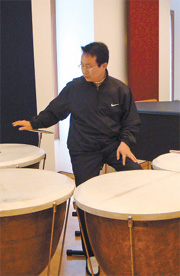 Park owns a collection of over 30,000 instruments. [JoongAng Ilbo]

It’s certainly made a name for itself. Founded in 1995, it received calls from 27 performance organizers needing instruments for the millennium year-end shows.

It begs the question, where does he keep all his instruments?

A trip to his basement warehouse in Dangsan-dong, western Seoul, reveals all. It’s a sight to behold. Here you can find an astonishing array of guitars, xylophones and triangles to rarer percussive items such as angklungs, balafons, congas, cabasas, sistres, paverus and celestas, all of different shapes and sizes.

Park has more instruments in other areas of the country in Jangwi-dong, northern Seoul, and Guri and Gapyeong, both in Gyeonggi Province.

Altogether he uses 1,388.4 square meters of floor space to house his collection.

Over the years, Park has noted some specific differences between what overseas musicians require when they come here and what local musicians need. 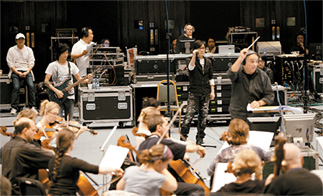 Some 50 of Park’s percussion instruments were used at the Seotaiji Concert, last September. [JoongAng Ilbo]

Park supplied the Michael Jackson concert in 1997 with about 30 different instruments including a bass, tam-tam and timpani drum. For Enrio Morricone’s concert in 2007, he dug out some 30 instruments, including chime bells, bass, harps and synthesizers. And he found some 50 percussion instruments for Seotaiji’s concert last September.

The reason Park owns so many percussion instruments is simple. He was a percussionist before, starting out in middle school.

He said he was always bashing out rhythms, whether it was on his lunch box or in the high school band he joined. He was far more interested in learning to keep the beat than keeping up with his studies.

He received lessons from Park Dong-wook, 76, the honorary head of the Percussive Arts Society of Korea and, at the time, a timpanist at the National Symphony Orchestra.

After receiving three years of lessons, he got a place at Kyung Hee University’s music department in 1981 and then studied for a diploma at the Poland Chopin Academy in 1994.

He also has experience as a senior timpani performer for the Chuncheon Philharmonic Orchestra and the Academy Symphony Orchestra.

He is currently the arts director at the Korea Percussions Orchestra and teaching music to students at Ewha Womans University.

He started collecting instruments when he was receiving percussions lessons from Park. With the money he earned, all he did was buy more instruments.

By 1993, he had collected 130 instruments. Through word of mouth, musicians started to rely on him for finding musical instruments for their concerts.

And with the rental money he received, he bought more instruments, which is how his business got off the ground.

The company gets over 100 performance proposals a month. Park manages the business with 20 other employees and he owns 11 vans for transporting his goods. But the company only brings in 50 million won a month, a small figure considering the size of the outfit.

“If you want to earn money, this job isn’t right for you,” Park said. “I know how hard life is as a musician. I don’t want to charge high rental fees. I just hope I’m contributing to the music scene here in a positive way.”

Park has one dream, though. He wishes to build an instrument museum, not only with a purpose of displaying but for playing concerts as well.

“The museum will bring music closer to the people,” Park said. “But ultimately, I want many famous music producers and writers to visit the museum and write their songs here with the provided instruments.”