The search for beauty in times of war

The search for beauty in times of war

An oil painting of orchids by Yi Ha-eung, and “Wolhajukrimdo” by Kim Kyu-jin. Provided by the organizer

Flowers blossom even in times of deepest sorrow, inspiring artists with their beauty and simplicity.

The current exhibition at the Hakgojae Gallery in Jongno, central Seoul, is a sample of works that bloomed during the Japanese colonial rule and political turmoil in the early 20th century.

Most are elaborate paintings of sagunja, a traditional art that depicts four plants - the plum, orchid, chrysanthemum and bamboo. There are also landscape paintings of flowers and birds and calligraphic works. 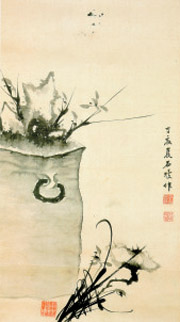 “The exhibition is an overview of how traditional Korean art turned to modern forms, which has certainly shaped contemporary arts today,” said Lee Tae-ho, an arts professor at Myongji University and the exhibition’s organizer.

Art is also a useful document of history, according to Lee.

Unfortunately, however, there have been few in-depth studies on modern Korean paintings due to a lack of resources.

“But many modern works are still highly valued and meaningful,” Lee said.

The paintings in the exhibition come from the personal collection of Woo Chan-kyu, the head of Hakgojae Gallery.

Woo has visited Japan numerous times over the past 10 years, buying the paintings and calligraphy from Japanese art collectors and galleries.

Many artworks were taken out of Korea during the colonial period. To date, Woo has brought back around 500 works.

A must-see is “Byungrando” (1887), an oil painting on silk. Yi uses light brushstrokes to draw an orchid plant in new bloom from a pot.

The story goes that Yi drew the painting when he was kidnapped by the Qing Dynasty forces during an army rebellion in 1882. Painting orchids was Yi’s way of coping with political struggles.

“Wolhajukrimdo” (early 20th century), a dynamic 10-fold screen by Kim Kyu-jin (1868-1933), is also on display. Kim, a noted bamboo painter, used ink to draw a night landscape with a full moon and bamboo.