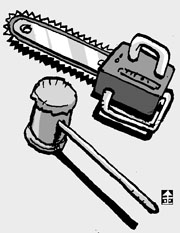 One should think twice before starting a fight. Throwing fists in fury cannot be considered a genuine fight. Violence should only be a life and death matter of last resort. Starting a fight without such determination is just and an emotional outburst.

The United States’ first treasury secretary Alexander Hamilton, whose face adorns the $10 bill, died after a dual with rival politician Vice President Aaron Burr. After an election defeat, Burr felt insulted by a published article and challenged Hamilton to a duel. Hamilton fell first with a fatal gunshot wound that cost him his life the following day.

In China, getting involved in a brawl requires extraordinary bravery. If one gets into a quarrel and the Chinese party asks you if you want a fight, it’s better to talk yourself out. Starting a fight with the Chinese will typically lead to a bloody mess. A fight there often involves sticks, tools, stones or any other weapons one can get one’s hands on. A fight usually ends when one sees blood or a fatal wound. Therefore, the Chinese generally avoid getting into fights over petty matters. The Japanese are no different.

Percival Lowell, who spent some time in Japan and Korea in the 1880s as a U.S. foreign secretary, recorded his account of a street fight in his memoir “Choseon, the Land of Morning Calm, A Sketch of Korea.”

He recalls seeing two bundles of clothes rolling on the ground with hands pulling mercilessly on the topknots of one another’s head. The foreigner recalled that breaking up the fight was more difficult than squeezing out wisdom from a friend in distress. Ancient Korean men grew their hair long and tied them in a knot on the crown of their heads. They valued them immensely and a hair-pulling fight would suggest a serious face-off to guard their honor.

Koreans often fight ugly. They start off by attacking the other party’s pride and feelings. The fight therefore ends without anything but hurt feelings and animosity.

The latest mayhem our politicians showcased in the National Assembly is such an example of fighting ugly.

Eventually the ruling and opposition parties shook hands. But one has to wonder what they achieved by mobilizing sledgehammers, saws and crowbars in the parliament building as they wrangled over contentious bills. If they ultimately came to a compromise rather easily, then why couldn’t they have done so when they were facing each other across the negotiating table?

In the public’s eyes, it was just a pack of ugly dogs fighting in the mud.