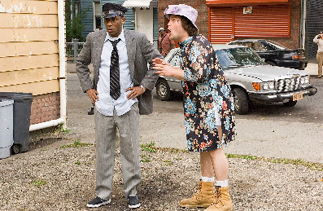 Jack Black is known for his own brand of absurd physical comedy, usually involving flailing limbs and idiotic, earnest facial expressions. In “Be Kind Rewind” he’s no different as Jerry, the wacky friend of video store employee Mike (Mos Def). In one of his harebrained schemes, Jerry convinces Mike to help him break into the nearest power plant, only to get electrocuted once Mike bails.

The scene, in addition to being central to the film’s plot, illustrates Black’s buffoonish charm. For the break-in, Jerry creates costumes to perfectly match the exterior of the power plant, from the “Keep Out” sign to the chain-link fence, even down to painting the fence’s pattern onto his face.

When the cops arrive, Mike and Jerry plaster themselves against the fence as camouflage. The effect, paired with Jerry’s wide-eyed, manic stare, is giggle-inducing in its sheer silliness - and it’s a mood that prevails throughout the entire film.

Turns out, Jerry’s electrocution has made him a giant magnet, and when he visits Mike at work, he erases all of the store’s VHS tapes.

Unfortunately for Mike, this also happens while his boss, Mr. Fletcher (Danny Glover), is away. Their only solution is to film their own low-budget versions of the films the customers want - this means using tinsel garlands as laser rays in their take on “Ghostbusters,” and using giant sheets of paper to recreate the animated animals of “The Lion King.”

If this all sounds pretty goofy, it is - but it works. The film is one of those classic change vs. tradition story lines that seems all too popular as the world grows more high-tech.

Obviously, Mike and Jerry would never have fallen into this predicament had the video store stocked DVDs - an option that Mr. Fletcher considers later in the film. But in the men’s run-down town of Passaic, New Jersey, old media prevails, if only because of its emphasis on the customer.

As demand for the obviously homemade videos increases, Mike and Jerry begin including their customers in their casts. Thus, “Driving Miss Daisy”-loving customer Miss Falewicz (Mia Farrow) becomes Miss Daisy, and so on. But soon, the amateur filmmakers run into some trouble with copyright violation, and must enlist their fans in a zany rescue mission for the store.

Be Kind Rewind is a pretty lightweight comedy, but its gags are good for some laughs. Mos Def’s unassuming, somewhat dopey Mike is a great counter to Black’s over-the-top Jerry, and the two create scenes that will surely elicit chuckles.

The film’s finale, the duo’s last-ditch effort to save the video store, gets warm and fuzzy, but steers clear of getting maudlin. In the end, Be Kind Rewind accomplishes its own humble goal of creating humor from its wacky homage to great films.