A stuttering attitude to public speaking

A stuttering attitude to public speaking 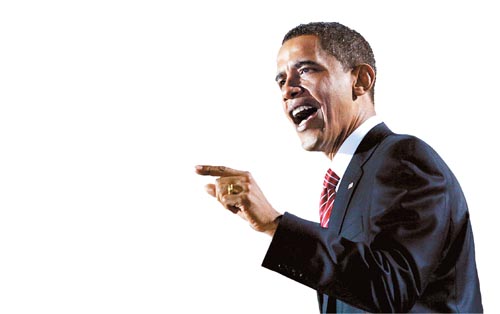 A serious look crosses the face of Seok-chan, 9, as he steps up to the podium. He takes a deep breath and awkwardly looks around the classroom before he finally starts his address.

In a school deep among a mass of towering high rises in northern Seoul, Seok-chan talks about his chosen topic for an upcoming national speech contest for young Koreans: kimchi vs. kimuchi, Japanese for kimchi.

He delivers his message with passion: The Japanese should stop claiming that kimchi, an iconic Korean dish, is their national product, and, secondly, Korean kids should eat more pickled vegetables to maintain their national heritage.

As his speech approaches its climax, Seok-chan raises his clenched fists above his head, his voice getting louder as he concludes, “Friends, let’s work together to tell the world that kimchi is an authentic Korean food!”

This kind of nationalistic propaganda was more common during the 1960s and 1970s when Seok-chan’s parents’ generation had to endure the turbulence of the Cold War and the virulent anti-communist campaigns of the Korean military government.

Back then, school students were ordered to draw anti-communist posters depicting North Koreans as horned demons, and cinema-goers had to sit through obligatory screenings of government news featuring footage of new highways and bridges under construction across the country.

This was the heyday of children’s speech classes but over the years this kind of oratory retreated from the classrooms and gradually died out. But in the past few months, there’s been a resurgence of interest in speechmaking ever since U.S. President-elect Barack Obama began mesmerizing audiences world-wide with his inspirational verbal flourishes.

“I think [Obama’s speeches] were a major turning point for many Koreans to realize that skilled oration can drastically improve your image,” says Jeong Ae-gyeong, a former professional storyteller and a speech instructor at a school in Seoul. “It’s the age of self-promotion and many parents are frustrated because their children do well in their studies but they are very timid when it comes to expressing their opinions in public.” 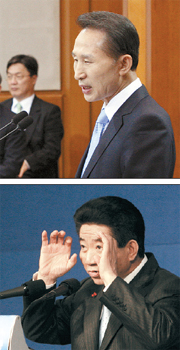 President Lee Myung-bak, top, is considered more solemn when giving a speech than his predecessor, former President Roh Moo-hyun, who was not averse to a verbal flourish or two. [JoongAng Ilbo]

“Traditionally, this is a culture where there’s more to lose than gain by being a brave speaker,” says Kim Mi-kyung, a speech instructor at the Institute of Art Speech. Her clients include Korean politicians and CEOs.

“We rarely get complimented for what we say when we grow up. Instead we’re taught to be more careful and modest when we speak to others even when it’s just one-on-one. Our society doesn’t trust people who speak well and often disparages them,” Kim says.

So, on the one hand, Koreans are disdainful of strong rhetoric, but on the other, they are aware of the power of verbal skills, a complex response that leaves many torn between fear and a desire to express themselves.

“Obama actively incorporated gesture and spoke with a sense of rhythm,” says Kim, who compared Obama’s method of giving a speech to a conductor and an orchestra. “[But] Lee stood behind his podium and didn’t move an inch.” 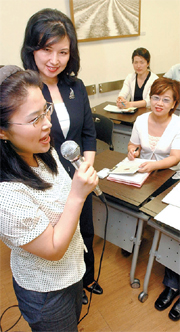 A student practices public speaking at a voice training school in Seoul.

The attitude that Koreans have toward public speaking mainly derives from a shared cultural understanding that a speaker needs to maintain his or her authority in public by being solemn and reserved rather than overdramatic.

That said, Korean has had its fair share of visionaries in the past who moved people with their words. Kim Gu (1876-1949), an independence activist during the Japanese colonial era, bequeathed a famous phrase to the country: “I want our nation to become the most beautiful nation. I don’t want our nation to become the richest and most powerful nation. I don’t want my nation to invade others, because I’ve felt the pain of being invaded by other nations.”

Former President Roh Moo-hyun is also remembered as a confident public speaker. But, unfortunately for him, by the time he took office, Koreans had seen too much political turmoil in the past and too many politicians who enthused the masses with grand promises that were never kept.

In fact, Roh’s eloquent speeches - at times richly metaphoric and other times simple and direct - did him more bad than good. They made him unpopular.

While in office, he suffered from what he often described as a “communication failure with the public.” Each time, he blamed the media for distorting the content of his speeches. Despite the risks involved, the former president was willing to communicate directly with the public, and he probably gave more frequent live televised speeches than his predecessors. 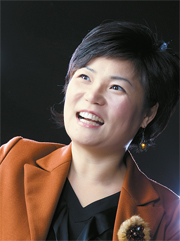 It’s fair to say that a deep chasm divides bland politicians from the sensational, and striking a balance is not easy.

Under the Lee administration, there’s been a definite shift in attitude toward speechmaking at the Blue House. Chung Yong-hwa, a speechwriter for the president, says a majority of Koreans no longer want to hear their leader make speeches designed to flare up the masses.

That’s why politicians tend to tone down their oratory and make them as dry as possible, as seen in Lee’s victory speech after the Korean presidential elections in 2007. And since he announced his controversial policy about U.S. beef imports last year, his speeches have been even more dry and circumspect.

“It’s a procedure that involves careful scanning of phrases word by word,” says Chung, a former Grand National candidate for a regional election who was assigned speechwriting duties last August. “Koreans mostly wish for a balanced leader who can oversee the nation calmly and safely.”

Chung says when he’s editing the president’s speeches, he and his team spend most of their time softening over-nuanced expressions and eliminating rhetoric. Even then, misunderstandings are inevitable.

During a visit to the United States in October, Lee caused a kerfuffle when he told a group of Korean residents in Los Angeles that people who buy stocks now will become rich within a year. Lee made the statement because he wanted to raise some optimism amid the gloomy economic landscape, according to the Blue House.

The media immediately shot back, saying the president’s comments were inappropriate. A JoongAng Ilbo editorial the following day called Lee’s remark “undignified” and “illogical,” explaining that his rhetoric was complete nonsense at a time when the global economy is spiraling out of control.

“These kinds of comments should be made by analysts at securities firms,” said the editorial. “The president shouldn’t be commenting on the markets and talking about selling stocks. His job is too important to be making such predictions about uncertainties. He should not lose the trust of people through irresponsible forecasts.”

Such incidents convince other politicians it’s better to keep their public comments bland and dry and stick to the facts.

This stance was reflected in the congratulatory message President Lee announced during the inauguration of IPTV, or Internet protocol TV. The tone after Chung’s edit had shifted from strong encouragement of new media services to the balanced role between the Internet and TV broadcasts.

Lee was worried that overpraising Internet TV might conflict with recent legislation that would allow cross-ownership of newspapers and broadcasters, Chung said, although the two were unrelated matters.

“A speech must always meet the public standard,” Chung says. “Koreans admire Obama’s speeches, but we’re a different country and in a different context. We’ve had respected literary figures write the presidents’ speeches in the past. But they didn’t work because they weren’t sensitive to the context of what a president could say to his people at a certain moment of history.”

Other communication experts agree that speech is simply a tool. “It’s a form of performance,” says Kim Seung-ki, president of the Korean Speech Association, “and it’s the ultimate form of verbal language. It’s an ability to gather and radiate all your communication tools, including your countenance and gestures, to deliver your words most fully.”

But Kim, an instructor at the Institute of Art Speech, feels that the impact of great speech is often based on trust and respect toward the speaker rather than just the technical details.

“Koreans spend too much energy correcting any slips into a regional dialect or developing ways to safely avoid technical mistakes like their pronunciation when they should worry more about simply communicating directly with their audiences,” she says.

“Training for public speaking is like learning how to ride a bicycle. The earlier the better.”