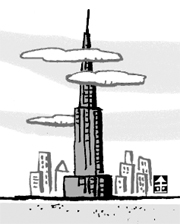 Chapter 11 of the Book of Genesis relates the building and destruction of mankind’s first high-rise - the Tower of Babel. The people of Babel, the Hebrew name for the ancient city of Babylon where people spoke a single language, started to build a tower out of bricks so high it would reach the heavens. God, disapproving of the motive behind the building, which was to depict the glory of man and not for God’s worship, created confusion by giving each person a different dialect that quickly brought construction to a halt.

The Bible does not tell exactly how tall the tower was but scholars estimate the height to be as much as 6,000 meters (19,685 feet).

Skyscrapers in the modern sense appeared with the 10-story Home Insurance Building in Chicago in the 1880s. The tallest building was displaced by New York’s iconic 449-meter Empire State Building in 1931.

Today’s modern high-rises fear the force of gravity more than God’s fury. In order to withstand the enormous G-forces, they need a reinforced concrete and steel skeleton. Without the advent of super-strong steel, today’s skylines would not have been the same. Bricks and stones theoretically could go as high as 1,600 meters, but in reality they cannot sustain more than 12 stories.

Environmental factors like high winds and earthquakes also pose serious challenges to tall buildings. Wind is four times more powerful on the 100th floor than on the 50th. A building may withstand a few slight shakes, but it is a different story if the building is inhabited. A skyscraper should house speedy elevators and massive tanks and storage to maintain water pressure for use by the thousands of people working in or occupying the building.

Advances in architectural technology gave birth to the 527-meter-tall Sears Tower in Chicago in 1974 and the 509-meter Taipei 101. The Middle East is seeing the latest contemporary high-rise boom, with the Burj Dubai currently under construction to target a landmark height of 808 meters, while the Kingdom Tower to stand in Jeddah, Saudi Arabia is reaching upward to a height of 1,000 meters. Korea is expected to join the heady heights with the construction of the 112-story, 555-meter-tall Lotte World II in Jamsil, southeastern Seoul.

Mankind’s race to reach higher for the sky is expected to continue, but if the building process does not thoroughly prepare for sudden natural disasters like freak typhoons or human-caused calamities like terrorist acts, blackouts or fire, there is no guarantee that the tragedy of the Tower of Babel won’t happen again.


The writer is a JoongAng Ilbo writer who specializes in environmental issues.